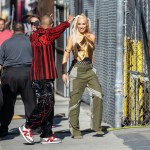 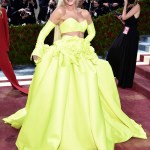 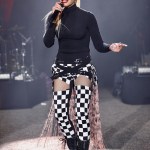 Bio:
Gwen Stefani (born Gwen Renée Stefani in Fullerton, California on October 3, 1969) is an American singer. She is the lead vocalist of the rock-ska group No Doubt. The band released several albums since forming in 1986, including Rock Steady, Push & Shove, and Tragic Kingdom. The band’s hit songs include “Don’t Speak,” “Just A Girl,” “Bathwater,” “Spiderwebs,” and “Hella Good.” Gwen started her solo career in 2004. She released several albums including Love Angel Music Baby and Sweet Escape. Her solo hit singles include “Hollaback Girl,” “4 In The Morning,” and “Wind It Up.” Gwen expanded her career into fashion, debuting her line L.A.M.B. in 2003 and expanding it with her Harajuku Girls collection in 2005. She expanded her Harajuku collection into a fragrance brand. Gwen also is the spokesmodel for L’Oreal Paris. In 2015, she joined The Voice as one of the rotating judges alongside Adam Levine and Blake Shelton.

Best Known For:
Gwen is best known as the lead singer of No Doubt and as a solo artist.

Personal Life:
Gwen is currently dating Blake Shelton. The pair confirmed their romance in November 2015 after meeting on the set of The Voice. Before Blake, Gwen was married to Gavin Rossdale for 13 years before they filed for divorce in August 2015. They have three children together — Kingston, Zuma, and Apollo. Long before she dated Gavin, Gwen was in a relationship with her No Doubt bandmate, Tony Kanal, who is rumored to be the subject of their hit song, “Don’t Speak”.

The musical couple enjoyed a family fun day at the ‘Most Magical Place On Earth’ just a few days before Christmas.

Amid preparing for Blake Shelton’s final season on ‘The Voice’, pop icon Gwen Stefani opened up about their favorite holiday tradition in a new interview.

The fashionista has arrived! Gwen Stefani looked absolutely in a red sequin jumpsuit during ‘The Voice’ season 22 finale.

Being a stepparent to Gwen Stefani’s three sons is a role that’s very important to Blake Shelton, and he opened up about it in a new interview.

Fond farewells. The singer couldn’t help but get emotional as she reflected on her ‘amazing’ last season on the singing competiton.

Married couple Blake Shelton and Gwen Stefani took their love to the stage as they performed a duet during ‘Christmas in Rockefeller Center.’

‘Christmas in Rockefeller Center’ featured a performance from Gwen Stefani, who stole the show in her holiday-inspired ensemble.