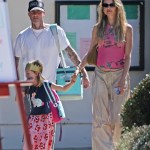 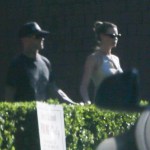 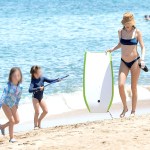 Bio:
Behati Prinsloo (born in Grootfontein, South-West Africa (now Namibia) on May 16, 1989) is a Namibian model. She was discovered at the age of 16 and has since walked in fashion shows for Chanel, Prada, Louis Vuitton and MaxMara. She has also been on covers of Vogue. She rose to model stardom in 2008 when she became the face of the Victoria’s Secret brand, Pink. She became a Victoria’s Secret Angel in 2009.

Best Known For:
Behati is best known for being a Victoria’s Secret Angel and her relationship with Maroon 5 frontman, Adam Levine.

Behati Prinsloo looked stunning when she showed off her bare, growing baby bump in a completely nude mirror selfie.

Behati Prinsloo looked fabulous when she showed off her baby bump in an unbuttoned cardigan sweater with leggings & face makeup for Halloween.

Adam and Behati’s daughter wore the perfect Wednesday Addams costume as she chased a creepy toy in a fun video clip!

The supermodel gave a peek at her baby belly during a smoothie run in Santa Barbara as she continues to support her husband Adam amid his flirting scandal.

The Victoria’s Secret model showed off how far along she is in her pregnancy in a mirror selfie, after sticking by her husband amid his flirting scandal.

An insider close to the Maroon 5 frontman revealed to HollywoodLife EXCLUSIVELY that the singer has been ‘glued’ to his wife’s side since the scandal.