Kim Kardashian, is famous for giving serious looking plump lip pouts when promoting her various KKW Beauty products. But she was smiling from ear to ear in a new Instagram video. She appeared so fresh and bubbly in a red leather outfit to promote a cosmetic collection inspired by Kim’s upcoming Oct. 21 40th birthday. The mom of four could be seen rocking a high pony, which seems to be the go-to hair look for the Kardashian-Jenner sisters these days. Khloe Kardashian, 36, just wore the hairstyle in a sultry IG photo, and Kylie Jenner, 23, could have passed for singerAriana Grande‘s twin with her high pony in Las Vegas over the Oct. 10 weekend.

Introducing the #Opalescent Collection in celebration of @kimkardashian's 40th birthday! Inspired by her birthstone, the Opal, the collection includes brand new Semi-Matte Liquid Lipsticks in 8 shades, a 10-pan pressed powder palette, an opalescent lip gloss and two new shades of our bestselling lip liner. Swipe to see the full collection launching on Kim's birthday at the time she was born — Wednesday, 10.21 at 10:46AM PT only at KKWBEAUTY.COM

Kim could be seen wearing a ruby-red corset-style sleeveless leather top with matching tight red pants. She stood against a shiny, silver backdrop and had a piece of white birthday cake in her hand. Kim wound back her arm and then tossed it forward at the camera. She then licked the vanilla icing off her fingers with her ruby-red KKW Beauty covered lips.

It is such a change to see Kim look so smiley in one of her beauty campaigns. She really looks excited for her upcoming birthday, and who wouldn’t when one looks as incredibly youthful as Kim does. Her face didn’t have a wrinkle to be seen in the video, and even as she turns 40 Kim still has one of the most famous figures in the world. The girlish high pony was the perfect ‘do for her look in the video.

Kylie just rocked a high pony during a weekend with pals in Las Vegas. The cosmetics mogul showed off a number of photos to her Instagram wearing a plunging, skin-tight glittery peach colored mini-dress. Even her perfectly manicured acrylics matched her frock, and the high pony was the perfect way to let the dress shine while still keeping her long locks flowing. 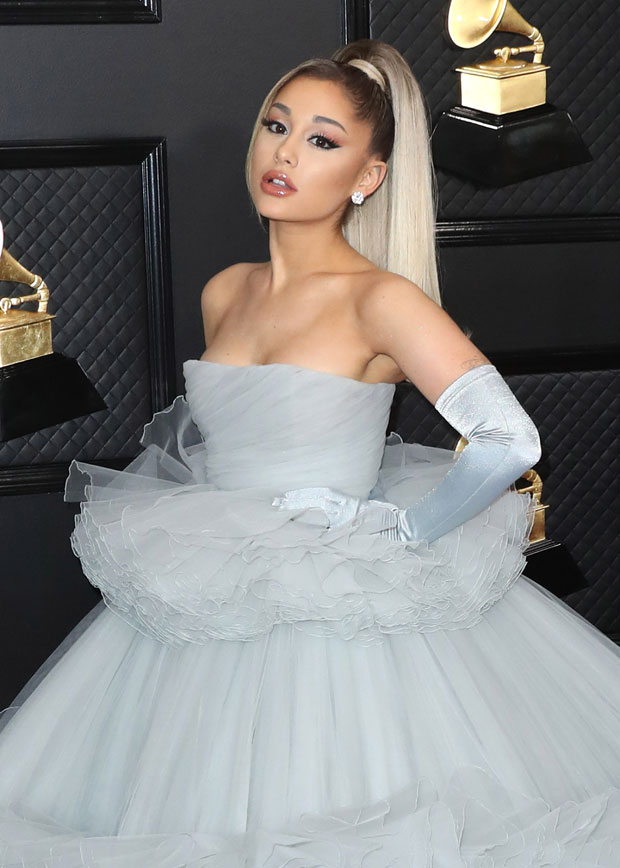 Of course the Kar-Jenner sisters’ hairstyles are all ultimately homages to the queen of the high pony, Ariana, 27. She’s worn the look consistently for nearly her entire singing career, ever since her debut album Yours Truly dropped in 2013. Awards shows, concerts, red carpets and in every day life, the high pony has been owned by Ari like nobody’s business.