In honor of One Direction’s 11th anniversary, celebrate by taking a look back at their then and now photos, and discover what they’re all up to today.

It’s hard to believe it’s been more than a decade since the British boy band One Direction was formed on The X Factor. July 23 marks the 11th anniversary of the band — Harry Styles, Liam Payne, Louis Tomlinson, Niall Horan, and former member Zayn Malik — being placed together by Simon Cowell. Their rise to fame was meteoric as they quickly transcended their reality TV fame, and emerged as serious, chart-topping pop stars shortly after the show. They also proved that you don’t have to win to make it big, as the five lads came in third behind runner up Rebecca Ferguson and winner Matt Cardie.

The early 2010’s were a non-stop force of One Direction mania as the boys released several smash hits and albums while touring worldwide to millions of screaming fans. Things took a massive turn, however, in 2015 when Zayn decided to leave the group and pursue his own solo opportunities. Despite finishing their tour as a foursome, the boys went on an indefinite hiatus shortly after Zayn’s departure. 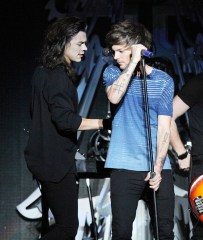 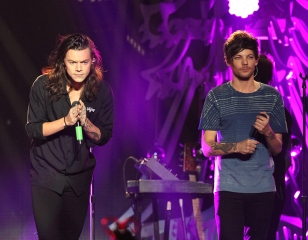 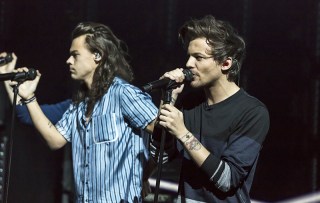 Harry’s solo career has taken off in the years since One Direction parted ways, but it seems nobody could have predicted just how quickly his star would rise. Not only did his eponymous debut album and 2019 follow up Fine Line top charts around the world, but he’s made a name for himself as a fashion icon, and a social commentator. Harry has even branched out into acting, and was seen filming Don’t Worry Darling, directed by his girlfriend Olivia Wilde, earlier this year. The couple appeared to make their relationship public after putting on a sweet display of PDA at a wedding for Harry’s agent in Montecito, CA on January 3, 2021. Harry — who officiated the wedding — looked very handsome in a black suit with a velvet bow. In the months since, the couple haven’t been shy about packing on the PDA while enjoying date nights, and cruising around on boats.

Liam Payne has continued to release music over the years, but also made headlines for his personal life. He welcomed a son named Bear with fellow singer Cheryl Cole in 2017. The toddler, who has been kept out of the public eye since his birth, recently celebrated his fourth birthday! In announcing his birth, Liam wrote on Instagram, “I’m incredibly lucky to welcome our new baby boy into the world. It’s a moment that I will never forget for the rest of my life and my favorite memory I have so far.” He later found love with girlfriend Maya Henry but their engagement came to an end in 2021. Liam opened up about some of the darker moments in his life during an interview on Steven Bartlett’s The Diary of a CEO podcast. During the exchange, Liam recalled a photo of himself partying on a boat, referring to that moment as his “pills and booze phase” amid the height of One Direction’s fame. He also shared, “I’ve just not been very good at relationships. I know what my pattern is with relationships at this point. I’m just not very good at them. I need to work on myself first before I put myself onto somebody else.”

Niall has also made an impact in the music industry. The Irish crooner has embraced his Ed Sheeran side on tracks like “Slow Hands” and “This Town” and made his solo Saturday Night Live debut in 2019. In the years since the group disbanded, Niall has offered some insight into the One Direction experience. He reflected on that period of his life during the March 23 episode of People, Just People with host Dermot O’Leary, comparing the experience to being “a prisoner”. “I struggled with the idea of, ‘Why won’t you just let us out?’” he explained, noting that fans would be “banging on car windows [before we could get out of the vehicle]. [I was thinking], ‘We just want to go for a walk,’ you know?”

Louis not only continued releasing solo music and collaborations with other artists, but he also returned as a judge to where it all began: The X Factor. He was also the first of the One Direction boys to become a father. The singer welcomed an adorable son Freddie Reign Tomlinson, with former girlfriend Briana Jungwirth in 2016. Louis’ mini-me celebrated his fifth birthday in January 2021, and he’s the spitting image of his dad. The former couple are very protective of their son and rarely share photos of him publicly. Louis opened up about fatherhood in a rare interview with Metro in 2019. He explained that Freddie and Briana live in Los Angeles, and Louis splits his time between there and the UK. “I try and spend as much time in England as I do LA and vice versa… to be there to see and go out with Freddie and all of that,” he told the outlet. “Then I have my family in the UK, who I make sure I see plenty of. It’s a bit of a juggle at times but it’s all part of life.”

Zayn Malik was the first to depart the band in 2015, and achieved his own success with the song and music video for “Pillowtalk”, which starred his now girlfriend Gigi Hadid. Speaking of the international supermodel, the “Vibez” singer welcomed a daughter named Khai with Gigi in September 2020. The 28-year-old opened up about fatherhood during a rare interview in March. “Honestly, it’s amazing,” he gushed. “A lot of people that I was speaking to, obviously, before she was born and stuff were like, ‘It’s a big adjustment, and it’s going to be a massive change and stuff.’ But honestly, she’s an amazing baby.” He added, “It’s been really easy for me and Gig to kind of just ease into it. She kind of made it easy for us, she sleeps really well, she loves her milk.”