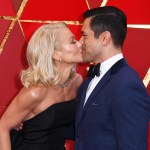 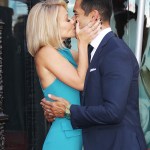 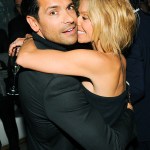 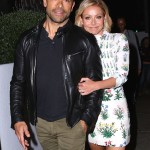 Kelly Ripa and Mark Consuelos prove that love can last in Hollywood! Take a walk down memory lane and look back at the couple’s love story!

Kelly Ripa and Mark Consuelos are truly a one-of-a-kind couple. The two have been together for decades, and consistently prove that they have one of the strongest romantic partnerships in Hollywood. Fans have loved watching each new chapter of their love story, and we’re going all the way back to the beginning to see how their relationship started!

Meeting On ‘All My Children’

It all began back in 1995 when Mark was cast as Mateo Santos on All My Children. The character was meant to be the love interest for Kelly’s role as Hayley Vaughan on the daytime soap opera. Little did viewers know that Mark and Kelly’s great chemistry on screen was all due to the sparks that were flying between them when the cameras were off!

Mark and Kelly took their relationship public on Valentine’s Day in 1996. The two attended the Soap Opera Digest Awards and couldn’t have looked cuter on the arrival carpet. It was so clear to everyone in attendance that these two were so smitten with one another. Months after their official red carpet debut, the couple would completely shock their fans with a surprise!

In May 1996, Kelly and Mark went to Las Vegas and eloped after mere months of dating. The couple made the decision completely off-the-cuff, as Kelly and Mark recalled during an episode of Live With Kelly and Ryan. “We went for a walk in the park. I convinced her to come back to my apartment,” Mark said. “We had pizza and wine and I asked her to marry me,” he shared. “I said, ‘Ask me when you’re serious,'” Kelly recalled of when her beloved husband initially proposed to her. “And he said, ‘I am serious. Let’s go to Vegas tomorrow and get married.’ …I said, ‘Yes!'”

Just over one year after they exchanged their vows in a Vegas chapel, Mark and Kelly welcomed their first child together. Michael Consuelos was born on June 2, 1997. Michael actually celebrated his college graduation from New York University in May 2020, and Kelly and Mark were so incredibly proud of their eldest for his wonderful achievement.

Although Kelly and Mark didn’t have the big blowout wedding that so many couples choose to have, they did have their own wedding when their characters on All My Children finally got hitched. The daytime TV event was complete with Kelly and Mark’s characters in their wedding day best. Kelly looked radiant in a white dress, and Mark looked equally dashing in his tux. The TV episode debuted in June 2000, just over four years after Kelly and Mark actually tied the knot.

A Family Of Four

One year after their TV wedding, Mark and Kelly welcomed their second child. Their daughter, Lola Consuelos, was born on June 16, 2001. With the addition of Lola, Mark and Kelly were both parents with two children under the age of five! Kelly has posted some adorable throwback photos of her youngsters over the years, and fans have loved seeing the kiddos grow up!

The More The Merrier

Finally, Kelly and Mark officially became a family of five just under two years after Lola was born. Their third child, Joaquin Consuelos, was born on February 25, 2003. Over the years, Kelly and Mark’s children have been right by their parents’ side for major family and industry events! And the couple just gushes about how incredibly proud they are of their three children.

After years had passed since they last shared the screen, Mark and Kelly reunited on set for a few episodes of Kelly’s early aughts TV show Hope & Faith. Mark appeared in a total of 10 episodes during seasons two and three of the sitcom. Mark played Gary ‘The Gooch’ Gucharez who, naturally, falls for Kelly’s character, Faith, over the course of a string of episodes.

The entire Ripa-Consuelos household came out to celebrate Kelly in October 2015 when the Live talk show host was officially honored with a star on the iconic Hollywood Walk of Fame! Kelly, Mark, and the couple’s three children all posed for photos at the event. “It all began with All My Children,” Kelly said in her moving speech. “All My Children is where I met the man that I’ve been married to for almost 20 years, the love of my life, the man who taught me how to be a person—really, a real person—and we have three of the most beautiful children, that I’m so proud of, on the planet.”

By May 2020, Mark and Kelly celebrated their 24th wedding anniversary! The couple marked the occasion with the usual social media posts, where they gushed about one another and marveled at the life they had built together. In May 2021, the pair will commemorate 25 years of marriage, and we know that there is more in store for this couple in the years to come!