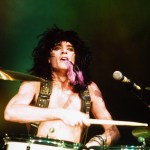 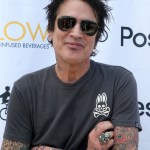 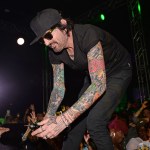 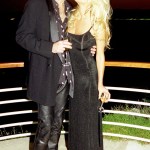 Bio:
Tommy Lee (born Thomas Lee Bass on October 3, 1962 in Athens, Greece) is a Greek-American drummer and co-founder of the heavy metal band Mötley Crüe. He also founded the band Methods of Mayhem. Mötley Crüe has sold over 100 million records, which makes it one of the highest-selling bands ever. Lee is known for memorable drum solos at concerts and employing special effects such as having his drum kit spun around, or playing while floating above the crowd. Lee also mooned the crowd at almost every show. Lee has contributed to the soundtrack of multiple projects, including the films Hot Tub Time Machine and Knocked Up. As of 2015, Lee is on a worldwide tour with Mötley Crüe.

Best Known For:
Tommy Lee is best known for being the drummer and a founding member of the band Mötley Crüe.

Lee first married Elaine Starchuk. After their divorce, Lee married actress Heather Locklear. Lee and Locklear split in 1993, and Lee married actress and Playboy playmate Pamela Anderson in 1995 after only knowing each other for four days. Lee and Anderson have a leaked sex tape, and Anderson sued the distribution company. They have two sons, Brandon and Dylan. Lee and Anderson divorced in 1998, but had an on-again, off-again relationship through 2008. In February 2014, Lee announced his engagement to singer Sofia Toufa.

‘Jersey Shore’: Angelina Admits She Only Slept With Chris Once In Their 2 Year Marriage

Tommy Lee did not appreciate Kim Kardashian’s bestie Jonathan Cheban dressing up as him for Halloween! Here’s what he said about it in response!

Is the drama between Tommy Lee and his son, Brandon Lee, headed for prime time? Tommy and Pamela Anderson’s baby boy is officially joining his friend, Brody Jenner, on ‘The Hills’ reboot!

Midnight Kids — Kyle Girard and Dylan Lee, son of Tommy Lee — have dropped their new song, ‘Find Our Way.’ Kyle spoke to us on making original EDM music and how they’re ‘lucky’ to have their families’ support!

Tommy Lee has sadly not been getting along with his son Brandon Lee and didn’t even see him or his other son Dylan Lee on Father’s Day. Find out why he feels Pamela Anderson is the reason for the unfortunate falling out.

Tommy Lee and Brittany Furlan fueled wedding rumors after they took to Instagram on May 27 to post a romantic pic of themselves kissing at a wedding altar but it turns out it was all a joke! Here’s what you should know about the cheeky bride-to-be!

Rocker Tommy Lee just said ‘I do’ with girlfriend Brittany Furlan! Here’s all the details on their picture-perfect wedding!