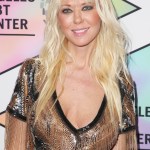 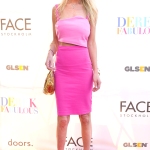 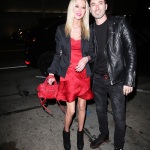 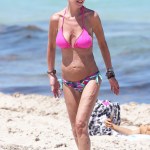 Bio: Tara Reid (born Tara Donna Reid in Wyckoff, New Jersey on November 8, 1975) is an American model-turned-actress who got her first big TV acting break on Saved by the Bell: The New Class. As a child, Tara appeared in commercials for brands like McDonald’s and Crayola. Her first movie role was in 1998’s cult classic The Big Lebowski. Tara found mainstream movie success in 1999’s teen-focused hit flick American Pie. She went on to reprise that role in the movie’s sequel, American Pie 2, which was released in 2001. Tara was most recently seen in 2013’s made-for-TV breakout hit Sharknado and also the sequel, Sharknado 2: The Second One, which premiered on July 30, 2014.

Best Known For: Her blonde hair, her wild partying ways and, unfortunately, botched cosmetic procedures. Tara admitted in 2006 that she’d had work done on her stomach and it “went wrong.” In her acting career, Tara’s most known for her role as innocent and sweet virgin Vicky in American Pie.

Personal Life: Tara famously dated former Total Request Live host Carson Daly. The two became engaged in October 2000, but broke up in June 2001 before tying the knot. It’s been rumored that Tara has also dated businessmen Michael Axtmann, Michael Lillelund and Zachary Kehayov. The last reported relationship Tara was in was with musician Erez Eisen. As of Sept. 2017, she’s been dating Ted Dhanik.

Tara Reid sizzled in a satin red mini dress as she enjoyed Valentine’s Day dinner with her boyfriend Nathan Montpetit-Howar.

Actress Tara Reid has responded to trolls who commented on her latest bikini pic, saying she looked ‘too skinny.’

Tara Reid has taken a tumble at her first red carpet event since the COVID-19 lockdown. The blonde beauty stepped out in towering six inch heels.

After Tara Reade accused Joe Biden of sexual assault, some supporters lashed out at her online — or they thought they did. Actress Tara Reid explains exclusively what it’s like being mistaken for the accuser.

Tara Reid showed off her boyfriend, Nathan Montpetit-Howar, in a sweet Instagram post while the pair vacationed in Cabo.

Tara Reid has been in so many films that have influenced modern pop culture, that picking just one to make again was a hard task. But, she did it, and revealed to HollywoodLife which cult classic film she wants to do again!

Tara Reid has been in a ton of cult classic films, but she never thought that ‘Sharknado’ would be one of them! The iconic actress spoke to HollywoodLife ahead of the final installment of ‘Sharknado.’