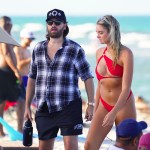 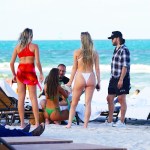 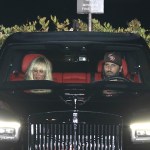 Bio:
Scott Disick (born on May 26, 1983, in Eastport, Long Island, New York) is a reality TV personality, model, and businessman. Scott works for GNC, managing businesses that create products for QuickTrim, Rejuvacare, and Monte Carlo Perpetual Tan, among others. He has also launched RYU, a New York restaurant, located in the Meatpeacking District. This entrepreneur rose to fame by dating reality star, Kourtney Kardashian. The couple’s makeups and breakups have been documented on Kourtney and her family’s series, Keeping Up With The Kardashians and Kourtney and Khloe Take Miami.

Best Known For:
Scott is best known for his conflicts with on-again off-again girlfriend, Kourtney.

Personal Life:
Scott and Kourtney have three kids together, including sons Mason and Reign, as well as their little girl, Penelope. Unfortunately, the couple reportedly split over July 4th weekend in 2015 after Scott was photographed cuddling with his ex-girlfriend, Chloe Bartoli. He was later linked to Bella Thorne and Lina Sandberg but has been seriously dating 19-year-old Sofia Richie since 2017.

Just over a week after creating a hilarious TikTok video with her mom, Kourtney Kardashian, Penelope Disick took to the video-sharing app to create a video with her dad, Scott Disick, on Dec. 27.

Scott Disick and Kimberly Stewart are growing closer and so are their daughters — Penelope Disick and Delilah del Torro.

Scott Disick made his first appearance on season two of ‘The Kardashians’ during episode 4 after taking a brief step back from filming.

A source close to Scott Disick EXCLUSIVELY told HL that losing the KarJenner clan will ‘always be a trigger’ following reports that he was ‘excommunicated’.

Kris Jenner responded to an Instagram post about the report, which went viral over the weekend, and praised the former boyfriend of her oldest daughter.

Kourtney Kardashian and Kimberly Stewart have been pals since they both attended Buckley School together — and now she is dating her ex Scott Disick!