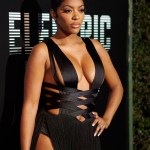 Bio:
Porsha Williams (born in Atlanta, Georgia, in 1982) is an American philanthropist and reality TV star. Before being introduced as a cast member of Bravo’s The Real Housewives Of Atlanta in its fifth season, Porsha briefly worked at the Center For Disease Control.

Best Known For:
Porsha is best known for starring on Bravo’s The Real Housewives Of Atlanta.

Personal Life:
Porsha married former NFL player Kordell Stewart in May 2011, in a ceremony that was actually featured on WETV’s Platinum Weddings. In March 2013, the couple decided to separate.

Dream Kardashian, 6, Is Too Cute Dancing With Brother King, 10, In Matching PJs: Video

Porsha Williams called her new husband her ‘love now and forever’ as she shared epic wedding photos from the Nov. 25 celebration.

Porsha Williams’ dress — which is deep red and decorated with feathers and gold accents — was on full display for all to view. See the dress here.

There’s no shortage of drama in the ‘RHUGT’ season 3 trailer. Porsha Williams fights with both Leah McSweeney and Candiace Dillard, Heather Gay and Whitney Rose have a falling out, and more.

Porsha Williams has reportedly been added to the next season of ‘RHUGT,’ which will film in Thailand. Tinsley Mortimer was supposed to be on the cast, but allegedly quit for ‘personal reasons’.

Porsha Williams struck a few sexy poses on the beach in Anguilla in her two-piece bikini. She also cozied up to fiancé Simon Guobadia in the photos.

The ‘RHOA’ alum showed off her expensive new gift on Instagram. Fittingly enough, it was delivered to her with a big red bow.

Porsha Williams has ‘not one regret’ about leaving ‘RHOA’ ahead of season 14, and she plans to continue supporting her former co-stars by occasionally tuning into the show.