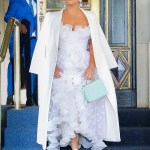 Bio:
Lady Gaga (born Stefani Joanne Angelina Germanotta on March 28, 1986)  is an American singer and songwriter. She was born in New York City, New York to Cynthia Louise (née Bissett) and Joseph Germanotta, an internet entrepreneur. Descending from Italian and more distant French-Canadian roots, Gaga is the eldest of two children. She attended the Collaborative Arts Project 21 (CAP21), a musical theatre training conservatory at NYU’s Tisch School of the Arts. Gaga withdrew at 19, deciding to focus on her musical career. After signing – and being dropped by – Def Jam, she signed with Interscope Records to release her debut album The Fame in 2008. With hits like “Just Dance” and “Poker Face,” she was a household name by the time her EP Fame Monster came out in 2009. This was followed by Born This Way (2011), Artpop (2013) and Joanne (2016). But even six Grammy Awards weren’t enough for the artist, who moved into acting and earned a Golden Globe for her role in American Horror Story: Hotel.

Best Known For:
Lady Gaga is known for her music and outrageous, attention-grabbing performances, as well as her avant-garde style of dressing herself.

Personal Life:
Lady Gaga began dating Taylor Kinney, 35, in Dec. 2011 just a few months after they met on the set of Gaga’s ‘You and I’ music video in 2011. Gaga announced their engagement on Feb. 16, 2015 by posting a picture to Instagram with the caption: “He gave me his heart on Valentine’s Day, and I said YES!” It was announced in July 2016 that Taylor and Lady Gaga had broken off their engagement. However, the two remain close and continue to fuel romance rumors with their constant support of each other.

Baby she was born this way! Lady Gaga showed off her stunning natural look as she forwent using makeup in a new sunny selfie. Watch the video here.

Lady Gaga showed off her retro style when she posted sexy pictures of herself aboard a private jet.

Lady Gaga glowed as she posted a sultry picture of herself laying on a bed while biting onto a diamond on June 17.

Lady Gaga is one of the most vocal celebrities when it comes to Pride Month & the singer celebrated pride in a sexy new bikini video!

June is Pride Month! If you need any style inspiration before heading out to your local Pride parade, we’ve got you covered with our roundup of rainbow outfits worn by some of your favorite stars.

It’s Pride month! Join us in remembering the celebrities who’ve used their voices and platforms to participate in Pride Marches all over the globe, from Lady Gaga to Cynthia Bailey.

There couldn’t be a ‘Friends’ reunion without ‘Smelly Cat!’ Lisa Kudrow was joined by Lady Gaga for a rendition of the classic ‘Friends’ tune during the reunion special.