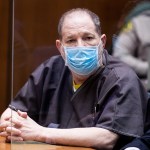 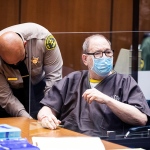 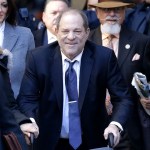 Bio:
Harvey Weinstein (born March 19, 1952) is an American film producer and former film studio executive. He co-founded Miramax, which produced movies including Pulp Fiction, Clerks, The Crying Game, and more. He also won an Academy Award for producing Shakespeare in Love. He has also won 7 Tony Awards for producing various plays and musicals. Harvey and his brother, Bob, were co-chairmen of The Weinstein Company from 2005 to 2017. Harvey was fired in October 2017, following allegations of sexual harassment and sexual assault.

Best Known For:
Harvey is best known for being an American film producer as well as being accused of sexual harassment and sexual assault in Oct. 2017.

Personal Life:
Harvey has been married twice. He first married his assistant, Eve Chilton, in 1987, but they divorced in 2004. They had three children together: Remy (born 1995), Emma (born 1998), and Ruth (born 2002). In 2007, Harvey married English fashion designer and actress Georgina Chapman. They have a daughter, India Pearl (born 2010) and a son, Dashiell (born 2013). But in October 2017, Georgina announced the two were separating, amid his sexual harassment scandal.

The verdict comes as he serves a 23-year sentence for a rape and sexual assault conviction in 2020.

Wendy Williams had a very similar reaction to many stars upon news that Harvey Weinstein was sentenced to 23 years in prison on March 11. — She was trilled. The host reacted to the verdict on her show.

More than two years after publicly accusing Harvey Weinstein of rape, Rose McGowan shared her moving plea after the convicted rapist was sentenced to 23 years in prison.

Reese Witherspoon joined the many voices sharing her thoughts on the ‘historical moment’ that saw convicted rapist, Harvey Weinstein, sentenced to 23 years in prison.

Harvey Weinstein has been sentenced to 23 years in prison for the rape and criminal sexual assault of two women in NYC. He will also formally register as a sex offender, per the March 11 verdict.

While Harvey Weinstein was supposed to be headed to Rikers Island jail after being found guilty of rape, he was instead rushed to a hospital after complaining of chest pains.