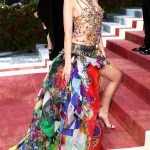 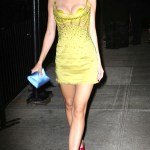 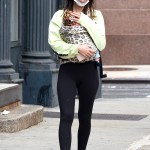 Emily Ratajkowski (born Emily O’Hara Ratajkowski on June 7, 1991, in Westminster, London, England) is an American model and actress. Considered one of the sexiest women on the planet, Emily has appeared on countless magazine covers, often wearing next-to-nothing. Yet, many might know her best from a certain music video.

Born in Westminster, London, to American parents, Emily lived the first years of her life in West Kensington and Bloomsbury before relocating, with her family, to San Diego, California. Emily grew up primarily in the beach city of Encinitas. At an early age, Emily was obsessed with theater. She staged shows for her family and performed with the North Coast Repertory Theatre School. In addition to that, she was also active in sports (playing soccer) and dance (practicing ballet.) While a career in acting was always a goal, Emily’s career took a different path when she was a young teen.

With encouragement from an acting coach, Emily signed with Ford Models at age 14. Her early work included print catalog modeling for brands like Kohls and Nordstrom. She began auditioning for acting roles and landed the part of Tasha on two episodes of Nickelodeon’s iCarly. After one year at UCLA, Emily withdrew to focus all of her time on modeling.

Having visited nude beaches in Europe with her family during her youth, Emily was not afraid of showing her body. She did nude and clothing modeling in 2012, including working with lingerie company Frederick’s of Hollywood. She posed nude on the cover of the artistic magazine Treats! in 2012, and she credited the cover for bringing her two high-profile music video roles: Robin Thicke’s “Blurred Lines” and Maroon 5’s “Love Somebody.”

“Blurred Lines” established Emily as a modern sex symbol. She initially declined the role, afraid of being typecast as a music video model (she had appeared in Taio Cruz’s “Fast Car” before Robin Thicke’s video, and was worried that she would be typecast.) After some persuasion from director Diane Martel, Emily took the role and appeared in both the safe-for-work version and the explicit version (which featured a topless Emily.) Though the video came under fire, with some feeling it promoted rape and misogyny, Emily did not feel objectified.

Emily’s career skyrocketed after “Blurred Lines.” Esquire magazine named her “Woman of the Year” in 2013. Rolling Stone listed her among its twenty hottest sex symbols of that year. In 2014, Sports Illustrated’s Swimsuit issue named her one of the twelve rookies for its 50th anniversary. Other publications – from Maxim to FHM – all raved over her desirability. With this notoriety, Emily capitalized by landing high-profile roles in films like Gone Girl (playing the mistress of Ben Affleck’s character) and in Entourage (playing a version of herself.) Her first leading role came in We Are Your Friends. Her performance earned mixed-but-generally favorable reviews.

From there, Emily continued to land high-profile modeling gigs. She appeared on covers of magazines like Glamour, Vogue Germany, Marie Claire, and more. She made her runway debut for Marc Jacobs at the spring/summer 2016 New York Fashion week finale – before walking in the fall/winter Paris Fashion Week runway for Miu Miu.

Emily continued her on-screen work by appearing in Netflix’s Easy, as a guest judge on season 15 of Project Runway, and in movies like In Darkness, Cruise, and Welcome Home. In 2017, Emily promoted the Fyre Festival, along with other actresses/models like Kendall Jenner and Bella Hadid. However, Emily was reportedly the only person who clarified that her post was a paid advertisement using the hashtag #ad. That year, Emily launched her own swimwear line – Inamorata – and, to this day, continues to fill her social media with shots of her wearing selections from the line.

Emily was romantically linked to musician Jeff Magid and Andrew Dryden in the past. In February 2018, she announced on Instagram that she had married actor/producer Sebastian Bear-McClard. The nuptials came after just weeks of dating, and the two tied the knot in a New York City courthouse.

On October 26, 2020, Emily penned an essay for Vogue in which she announced that she and her husband were expecting their first child together.

A proud “feminist,” Emily also promotes sexual expression and the empowerment of women’s sexuality. This has put her at odds with other feminists who disagree with her position. In 2016, Emily spoke at a Bernie Sanders presidential campaign rally in New Hampshire. She would endorse him in 2020 for the Democratic presidential nomination. In addition to this., Emily is also an outspoken supporter of Planned Parenthood.

The Most Popular Questions About Emily Ratajkowski

What Breed of Dog Does Emily Ratajkowski Have?

Emily adopted her gorgeous pup Colombo in 2019.  Her BFF, who she can often be seen walking around New York City, is a beautiful a Husky-German Shepherd mix breed.

Does Emily Ratajkowski Have an Accent?

Though born in London, Emily was raised in America, and thus, has an American accent. “People either think I have a crazy Polish accent or a British accent; then I say ‘gnarly’ and surprise everyone,” she told Vanity Fair.

Ben Affleck Wraps His Arm Around J.Lo’s Child Emme, 14, As They Visit Him On Set

Cue the next ‘Cinderella’ reboot. While Emily Ratajkowski made her way to an NYC hotel for a Met Gala after-party, the model lost one of her hot pink pumps!

Crop tops reign supreme at Coachella! Brazilian superstar rocked a blue, green and yellow version Everyone from Emily Ratajkowski to Kylie Jenner showed up to the music festival in sexy crop tops.

To celebrate National Puppy Day, we’re rounding up all the most adorable photos of celebrity pet owners like Lady Gaga, Emily Ratajkowski and more with their sweet dogs.

Emily Ratajkoswki is the proudest of moms, celebrating her son’s first birthday with a slew of au naturale pics showing off her very pregnant belly pre-Sylvester’s birth.

There seem to be blurred lines between the truth and the allegations leaked from Emily Ratajkowski’s upcoming book about Robin Thicke. The model is now speaking out.