Amid the controversy over Kanye “Ye” West burying a replica of Pete Davidson in his “Easy” music video, and justifying this alleged attack on Kim Kardashian’s new boyfriend as artistic “therapy,” Ye, 44, posted a new piece of art on Tuesday (Mar. 8). Ye prefaced the poem he published on his Instagram with an explanation about how he hates explaining himself. “I feel already compromised that I have to justify my expression after over 20 years of art that I’ve contributed to the planet, but I also see the need to make sure we as a species are allowed to still feel anything,” wrote YE, 44, whose message’s lack of punctuation invoked memories of e.e. cummings.

“Men not allowed to cry. Celebrities not allowed to cry,” continued Ye. “I will not explain this new piece for the explanation destroys the mystery and magic of true love and puts it in a box that can be counted. Art is subjective. Art only works when it is the artist’s absolute truth. Someone’s truth can be another person’s lie. We don’t all have to feel the same because we are not the same. Without further ado, I present to you my latest creation it is called DEAD.” 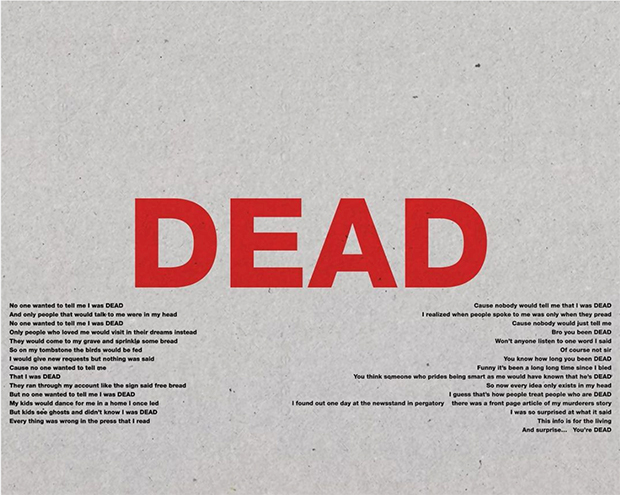 The poem goes, if reading the paragraphs in a left-to-right manner:

Kanye’s “DEAD” came four days after he published a poem titled “DIVORCE.” In the piece, Ye listed the things that divorce is like, comparing it to “walking on glass,” “suffocating,” “your teeth being pulled with pliers,” “getting beat up in the mall,” and other painful similes. Ye also said that divorce feels like “your kids were snatched from your control,” echoing the recent drama of his personal life concerning North West’s TikTok and Chicago West’s birthday party.