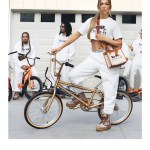 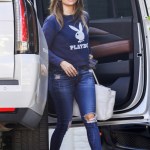 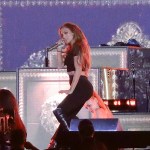 Jennifer Lopez spent quality time with her twins Emme and Max after enjoying a date night in West Hollywood with her on-again beau Ben Affleck.

Jennifer Lopez and Ben Affleck have been enjoying a renewed romance, 17 years after they first dated. But, no matter how exciting her love life gets, being a mom to her 13-year-old twins, Max and Emme, is still Jennifer’s top priority.

The “Let’s Get Loud” singer’s devotion to her kids, who she shares with her ex-husband Marc Anthony, was on full display in a series of photos she posted to her Instagram page on June 3.

In the slideshow, the 51-year-old Hustlers star cuddles up to her teenage son and daughter, who she affectionally calls “the coconuts.” In the first snap she can be seen posing for a selfie son, while laying next to him on a private jet.

Jennifer’s post in honor of her kids comes just three days after she enjoyed a date night with Ben at Wolfgang Puck’s new restaurant inside the Pendry hotel in West Hollywood. The “Jenny From the Block” singer and the Justice League actor, 48, rekindled there romance in April, shortly after she and Alex Rodriguez called it quits after a nearly two-year engagement.

Shortly after the news broke that Jennifer and Ben were giving their love another shot they were spotted on a trip to Montana. They also recently enjoyed a low-key vacation together in Miami. But, as HollywoodLife previously reported, Jennifer hasn’t introduced Ben to her kids.

“Jennifer’s excited for Ben to meet her kids, she’s so proud of them, but it hasn’t happened yet. She’s letting them set the pace,” a friend close to the Emmy nominee shared. “She’s very tuned into them so as a mother she’ll know when they’re ready. For now she’s been focused on reconnecting with Ben and enjoying her time with him.”

“Even though so many years have gone by in a lot of ways it’s like no time has passed, their connection is so natural. If you had told her a year ago that she’d be dating Ben again, she never would’ve believed it. But the universe works in mysterious ways and she’s just trying to stay open to whatever is meant to be and enjoying every step along the way.”

A second source who is close to the Oscar winner said, “Ben and Jen are working on each other and once that perfects itself, then they want to add the kids to the situation. Right now they are just happy that they are able to invest another honeymoon phase to their relationship and they want to see where their feelings take them.”