Megan Fox truly looked like an angel when she posed underneath a light-up halo in her latest Instagram snap. The 34-year-old actress took to social media on May 4, to share two snaps of herself rocking a black ‘fit. In the pics, she offered the camera a sultry look, as she wore a skintight, sheer black tank top and PVC leather pants. The Transformers star, who has been dating rocker Machine Gun Kelly, slicked her raven tresses back into a ponytail, while allowing a few strands of hair to frame either side of her face.

She cheekily poked her tongue out at the came in one of the snaps, as she rocked dark, smoky makeup while posing in front of a pink and purple dreamscape background. In the caption, she wrote in an upside down font, “A case of mistaken identity.” It comes just a couple of weeks after Megan helped her new beau celebrate his 31st birthday in Los Angeles. The pair also recently went to the UFC 260 fight in Las Vegas for a double date with Travis Barker, 45, and new girlfriend Kourtney Kardashian, 41.

A source close to the couple recently told HollywoodLife EXCLUSIVELY that the pair love double dates. “This was not the first time Kourtney and Travis have hung out with Megan and Colson. Colson is over at Travis’s house a lot and Megan is usually with him, so Kourtney has gotten to know both of them through Travis and they’ve all become friends now,” the insider dished. 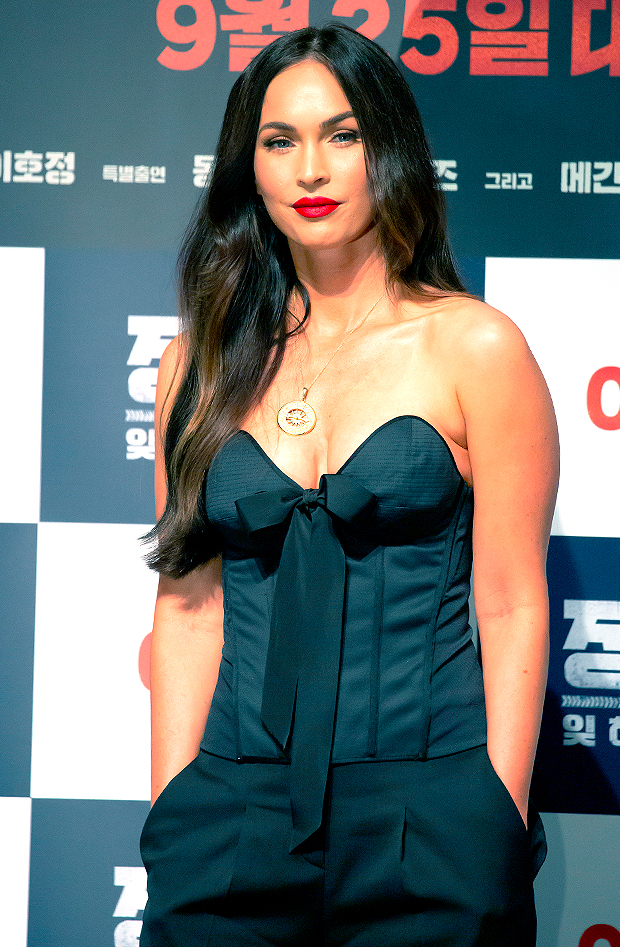 MGK and Megan are around the one-year mark in their relationship, after first meeting on set of the film Midnight in the Switchgrass in Mar. 2020. They immediately fell hard for each other, and were first photographed out in Los Angeles amid quarantine for her birthday in May.

Two days later, Megan’s husband of nearly 10 years, Brian Austin Green, confirmed he and the Transformers star had separated. Megan finally filed for divorce in Nov. 2020. 2020 was the year of PDA filled dates, for the couple, with MGK even confessing that he was “in love” with Megan during a June 2020 Instagram video. We couldn’t be happier for them!