Happy Birthday Machine Gun Kelly! The “Bloody Valentine” singer turned 31 on April 22, and his loving girlfriend Megan Fox was on hand to help him celebrate. The pair hit up Los Angeles hot spot Delilah for a late night celebration with a group of pals, and the singer (born Colson Baker) blew out the candles on a huge pink and black cake. He took to his Instagram Stories to share a series of clips from the dinner, including one which showed him kissing Megan before blowing out the candles.

“Dream big,” he captioned the video. While Megan opted for an all-black ensemble, all eyes were on her man as he totally stole the show in a white and silver sparkly top. He also debuted his latest tattoo, which featured a thin red line down the front of his throat. It seems the duo are more loved up than ever, and recently went to the UFC 260 fight in Las Vegas for a double date with Travis Barker, 45, and girlfriend Kourtney Kardashian, 41.

A source close to the couple recently told HollywoodLife EXCLUSIVELY that the pair love double dates. “This was not the first time Kourtney and Travis have hung out with Megan and Colson. Colson is over at Travis’s house a lot and Megan is usually with him, so Kourtney has gotten to know both of them through Travis and they’ve all become friends now,” the insider dished. 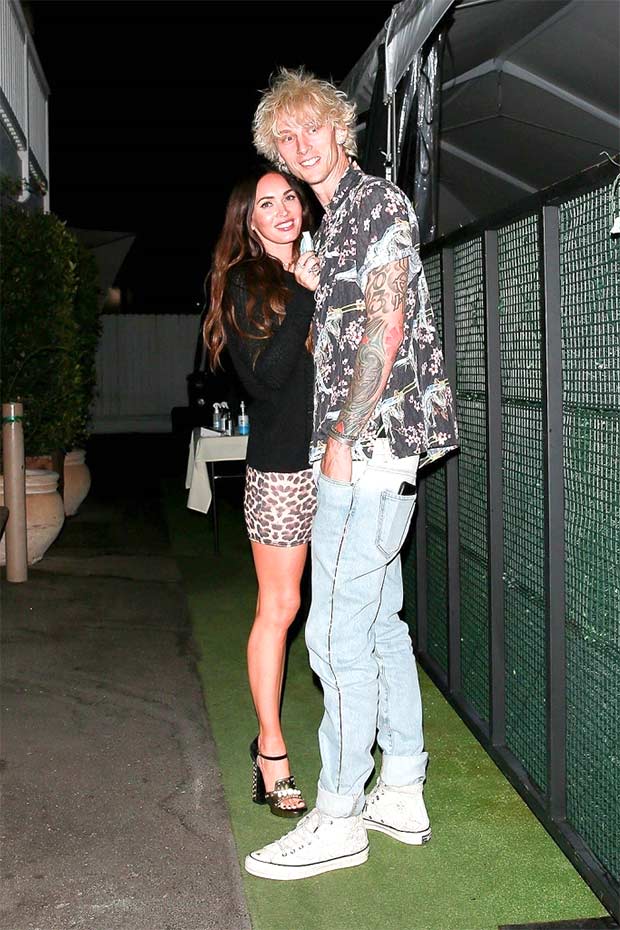 The source continued, “They do dinners at home or hang out in the studio all together. It’s cute because they’re both in such happy relationships. so it’s very lovey dovey.” A second insider also told HL that fans should expect to see a lot more of the two couples together. “They all have the same interests and love living life. They are legitimately all friends with each other. We are going to see them all out together plenty of times in the future, start getting used to it.”

“They are all in love and that in itself is a fun and nice thing to share with each other. Hanging out together provides such a fun outlet. When they do these outings together like going to a UFC fight because they are sick of being quarantined, it is actually something where they are really having a fun time,” the insider explained.