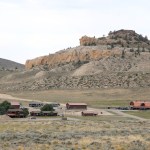 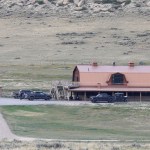 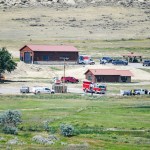 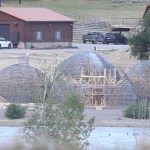 From eight luxury cabins to a lake named after himself, Kanye West’s massive Wyoming ranch has it all. See photos of the seven-mile property here!

He traded Hidden Hills for a home on the range. As Kanye West‘s divorce drama with Kim Kardashian continues to brew in Los Angeles, the Yeezus rapper has hidden out at his sprawling Cody, Wyoming ranch. Kanye’s seven miles worth of property has been his preferred getaway for working on music, crafting new Yeezy designs, and plotting presidential campaigns. And now, he calls it home full-time.

But don’t think Kanye’s out there roughing it in the wilderness. The billionaire music mogul, 43, is living like a king! He purchased the Monster Lake Ranch Resort (named such because of neighboring lakes full of monster trout) in September 2019 for $14 million. The impressive property is comprised of eight different parcels of land. Within those parcels are eight luxury cabins, which can house up to 20 guests each. When his famous pals like Justin Bieber come to visit, it’s clear that they’re taken care of.

It’s not just lodging in Kanye Country, though. The ranch also contains a restaurant dining area, meeting rooms, and even its own saloon, according to a listing for the property on Trulia. The ranch is located amongst gorgeous green hills and fields, near the newly-renamed West Lake, and sits just an hour away from Yellowstone National Park — perfect for when you have four curious young kids.

But wait — there’s more. Kanye has been spending time over the past year renovating his property to become even more luxurious. Construction crews were seen hard at work at the Wyoming ranch in July 2020 renovating existing structures. As of March 2021, the ranch includes 27 bedrooms and 17 bathrooms, according to property records obtained by the New York Post.

After Kim filed for divorce in February 2021, Kanye immediately headed out to Wyoming — well, after grabbing 500 pairs of shoes from their house first. A month before Kim filed, as split rumors swirled, Kanye spent time in Cody to “take some space” from his estranged wife. Kanye is “happiest” when he’s in the Cowboy State, as source told HollywoodLife at the time.

And now, it’s easy to see why! To see more photos of Kanye’s ranch in Cody, Wyoming, scroll through our gallery above.