Will there be a wedding in the series finale of Keeping Up With The Kardashians? In a new teaser trailer for the show’s final season — which begins airing on March 18 — Scott Disick, 37, makes a big promise to his ex and mother of his three children,  Kourtney Kardashian, 41. In a brief shot, Kourt is seen smiling and looking across a table at Scott, who appears well groomed and handsome in a blue crewneck sweater. “I’ll marry you right now,” he tells his former partner. But the video doesn’t show her reaction.

It’s unclear if the promise was a recent one or from further back in the series’ archives and outtakes. Past clips are interspersed with current ones in the trailer. When Kim does a voice over at the start saying, “We didn’t even think we’d get to season two,” Scott is seen lifting up a smiling, then-very pregnant Kourtney onto a kitchen counter top in happier times early on in the series. Even after Kourtney and Scott split in 2015 after nine years as a couple, he’s continued to be an integral part of KUWTK.

If Scott’s promise of marriage is from a recent filming, his current squeeze Amelia Hamlin, probably wouldn’t be thrilled with the prospect. The 19-year-old has been dating Scott since Halloween 2020, and they recently took a romantic Valentine’s weekend getaway to Miami. During the trip, Scott even made the teen Instagram official as his lady. They started seeing each other just a few months after Scott’s three-year relationship with Sofia Richie, 22, finally came to an end in Aug. 2020. 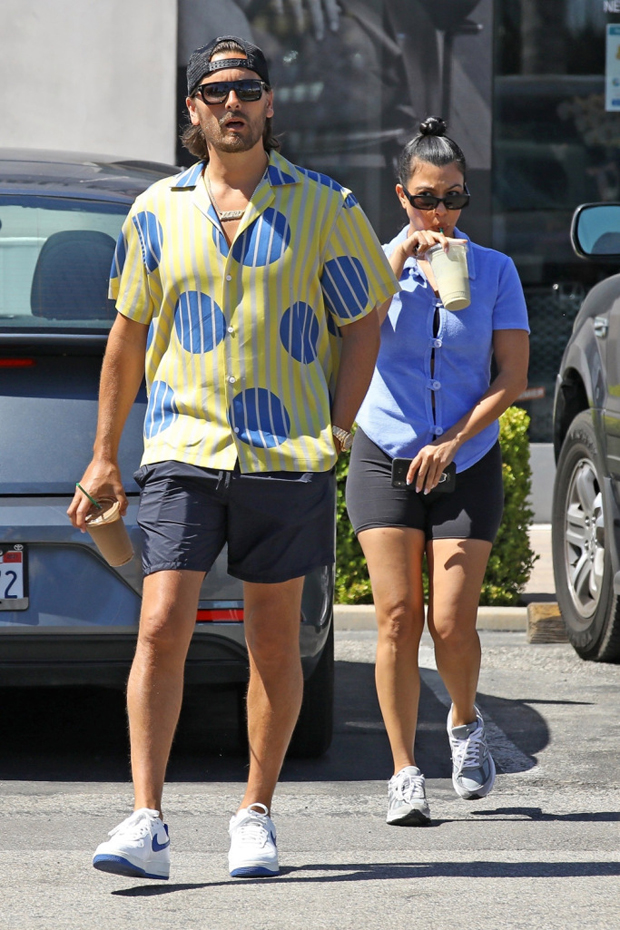 Scott Disick and Kourtney Kardashian have remained friendly co-parents. They’re seen on a coffee run in Malibu together during the summer of 2020. Photo credit: BACKGRID.

Kourtney definitely didn’t take Scott up on the marriage offer, as she’s now officially in a romance with Blink 182 drummer Travis Barker, 45. The two had been friends for years before they started getting flirty towards the end of 2020. They fueled dating rumors in Jan. 2021 by going on a Palm Springs getaway together, and Travis continued to drop amorous comments next to her Instagram photos.

On Feb. 16, she made him Instagram official in a photo showing her perfectly red manicured hand holding onto the rocker’s heavily tattooed hand. Travis left a black heart emoji in the comments of Kourtney’s revealing post. He even re-grammed it to his own IG stories so his fans were aware of their romance. 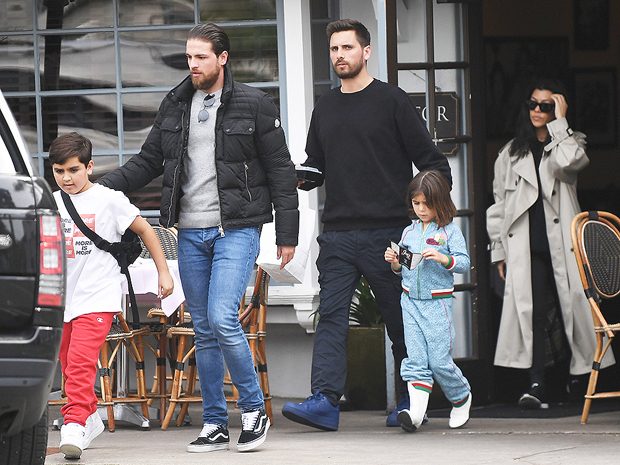 Kourtney Kardashian had lunch with ex Scott Disick and their kids while on vacation together at Tre Lune in Montecito, CA on Sunday, March 10, 2019. Scott’s then-girlfriend Sofia Richie was also along for the trip. Photo credit: MEGA.

Kourtney and Scott have developed into loving co-parents, but their romantic days are long gone. As their sons Mason, 11, and Reign, 6, celebrated their birthdays on Dec. 14, 2020, Scott shared an IG family photo of the four of them (minus daughter Penelope, 8,), smiling together on the stairs at her home. He wrote in the caption, “Thank you @kourtneykardash for being the best baby maker in town, I couldn’t have asked for a better person in the world to have these amazing children with, I love u and our family more than anything in the world.”

“Celebrating his little ones’ birthdays really had Scott all emotional and thankful for what he and Kourtney created,” a source EXCLUSIVELY told us at the time. “He loves her as a mother and loves that they have found a way to co-parent so well together. They are a good team…sure, the romantic part of their life together is no longer but he is very happy being a family with her for the benefit of the kids.”