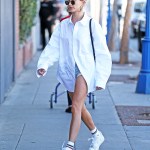 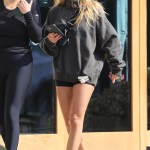 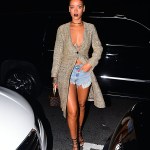 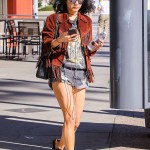 Sofa Richie and her BFF Tess Kemper were spotted leaving a West Hollywood gym after a workout! The blonde kept a pair of sunglasses on her head as she walked back to her car.

Sofia Richie, 22, was seen stepping out in Los Angeles. The daughter of Lionel Richie and her longtime best friend Tess Kemper exited a West Hollywood area gym on Thursday, Feb. 11. Sofia soaked up the sunshine in a fitted pair of black short shorts, along with a ’90s inspired mock-neck zip from Fear of Gods’ ESSENTIALS line ($95). She kept the throwback vibes going with Prada’s $1,400 black nylon “Re-Edition” bag, which she also owns in the nude “Cameo” shade. The crossbody bag features a wide strap with the “Prada” logo as well as a small coin purse attachment.

She finished her look with a cozy pair of baby blue shorts and a white banana clip attached to her shorts. She kept her blonde hair down as she appeared to walk back to her car, opting for a protective dark gray face mask and a pair of black sunglasses. Tess opted for an all-black ensemble, including a black long sleeve from Alo Yoga and fitted leggings.

Recently, Sofia was spotted kissing a new flame: billionaire Gil Ofer. The model and heir packed on the PDA while at Miami Beach on Jan. 31 while she was staying at the luxe Faena Hotel. At one point, Gil even rested his hand on Sofia’s shoulder. She stunned in the photos, rocking a coordinated blush ensemble that included a leopard bikini, bucket hat and on-trend culotte pant. “Sofia likes Gil and has been out a few times with him, but she isn’t interested in jumping into a relationship or getting serious with anyone right now,” a source previously spilled EXCLUSIVELY to HollywoodLife following the romantic getaway.

“She had fun and enjoyed spending time with him while she was in Miami, but she’s also dating other people casually. Sofia knows she’s young and has her whole life ahead of her so she’s enjoying the single life for the time being,” the insider noted, adding, “She hasn’t found anyone she’s interested in making a commitment to and she’s happier than ever right now.” Shortly after the trip, Sofia was also spotted back out in Los Angeles with friend Jaden Smith, 22. Previously, Sofia dated Scott Disick, 37, and was linked to Matthew Morton, 27.