The Kar-Jenner clan has seemed to be pretty immune to putting big birthday plans on hold despite the COVID-19 pandemic. Even though gatherings in SoCal are limited to immediate household members only, Kylie Jenner and Travis Scott threw a guest-filled birthday party for their daughter Stormi Webster on Feb. 1 as she turned three-years-old. Some fans were shocked to see video of a room crowded with unmasked partygoers singing “Happy Birthday” to the little cutie before she blew out the candles on her pink princess castle cake.

Kylie had her $36 million Holmby Hills mansion done up with colorful balloons, including gold mylar ones that wrote out the party’s theme, “3rd Time’s A Charm.” The 23-year-old shared photos and video from the event to her IG stories, showing tables overflowing with delicious desserts, a bubble machine and a tall, colorful rainbow blow-up slide that was set up on Ky’s tennis court. A food truck was even brought in to serve guests cooked to order chicken fingers.

A number of fans thought Kylie’s celebration for Stormi in the middle of a pandemic was over the top. User @jihanexoo noted, “Corona going on and they are partying,” and user @patriciaaaaa responded back, “It’s seriously so disgusting to me tbh.” User @helenaririassa asked, “Is there no Corona over there??” while @mzz_icy commented, “No masks unsafe to all.” Fan @the_duchess_witch agreed, noting, “Not a mask in sight…” at the gathering while @heavens44 commented on one of the IG fan reposts, “Guess they all were tested for covid?” 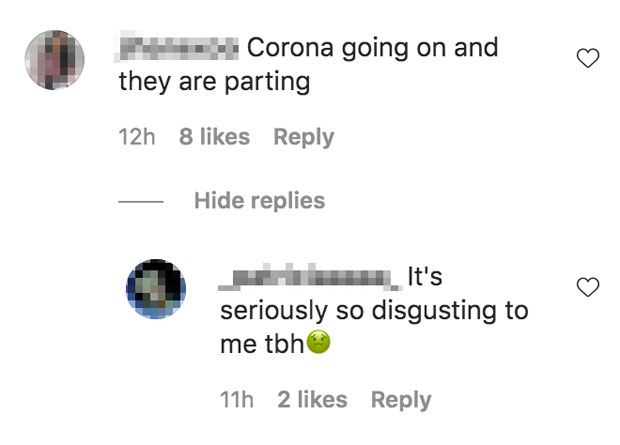 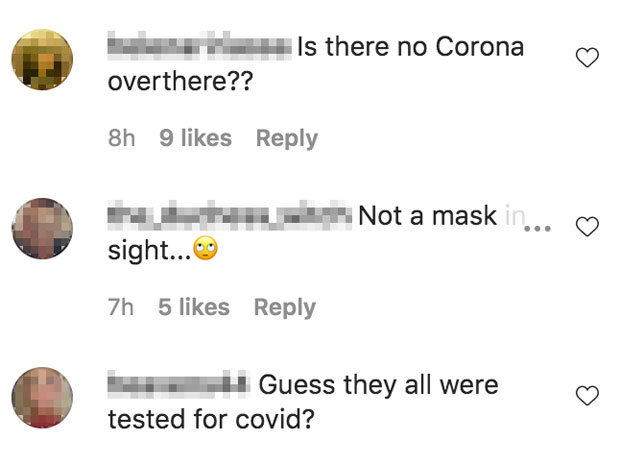 Fan accounts that posted video of Stormi’s party from Kylie’s Instagram stories were flooded with critical comments about their partying in a large, maskless group in the midst of the COVID-19 pandemic.

Another user @kowalmc1987 echoed a sentiment that has dogged the KarJenners throughout their various birthday bashes as most Angelenos limit contact and gatherings to help stop the COVID-19 spread. The user wrote, “Yes, let’s all gather closely together, we’re wealthy and entitled so social distancing doesn’t pertain to us”

Stormi already had one luxury birthday bash, as Kylie flew her sisters Kim, Khloe and  Kourtney Kardashian and their daughters — as well as close gal pals —  to the Turks and Caicos for a girl’s weekend ahead of Stormi’s actual birth date. At least the group spent most of the time outdoors and were socially distanced at a luxury villa.

Kim took serious heat when she flew a gaggle of pals old and new to a private Tahitian island in Oct. 2020 for a massive six-day, 40th birthday celebration blowout. After she was criticized when many videos and photos turned up online, Kim tweeted, “After 2 weeks of multiple health screens and asking everyone to quarantine, I surprised my closest inner circle with a trip to a private island where we could pretend things were normal just for a brief moment in time.”

Sister Kendall Jenner then held a Halloween slash 25th birthday party at Harriet’s Rooftop in West Hollywood, CA on Oct. 31. It was a large and seemingly maskless event with A-listers including  Justin Bieber, 26, Hailey Baldwin, 24, Travis Scott, 29, and Quavo, 29. The bash caused Kenny to be the subject of backlash and called “irresposible,” as COVID-19 lockdown protocols were still in effect. Her mom Kris Jenner, 64, later explained in an interview with Andy Cohen that all attendees were tested for the virus and had to wait a “half an hour” to find out the results before being allowed inside. But the optics of rich and famous people partying like there was no public health crisis still wasn’t a good look.