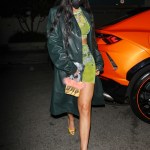 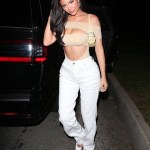 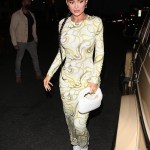 Kylie Jenner also paid tribute to Kobe Bryant wearing a pair of Air Jordan’s designed after him. The rare shows featured the LA Lakers colors of purple and gold.

Kylie Jenner, 23, looks sensational with her red hair! The Kylie Cosmetics mogul showed off her fire locks as she soaked up the sun in a new set of photos posted to her Instagram account on Saturday, Dec. 12. She kept her har in a side parted, low ponytail as the natural sunlight captured the dramatic new hue. While we’ve been loving her honey highlights in recent months, the change is perfect for the festive holiday season.

The Keeping Up With The Kardashians star channeled the ’90s in Sorella Boutique’s nude-colored reversible twist bra top ($20), revealing her toned abs. She paired the bikini-style top with a pair of loose fitting, light wash jeans and a hard-to-get pair of Air Jordan 3 sneakers, referenced by her gold-and-purple heart emojis. The Kobe Bryant edition pair of the shoes were worn by the late star during his 2002-2003 season, with a limited run released just to his friends and family in 2016. The shoes never made it to retail, however, one pair made it to the second-hand market listed for $30,000 back in 2017.

Fittingly, Kylie appeared to be standing on the basketball court of her $36.5 mansion. She posed against a doorway, with a loose fitting white blazer draped far off her shoulders and around her waist as well as a “gold-leaf” Hermès Kelly bag. The pricey accessory was customized by Max Paints Bags, the man responsible for Khloe Kardashian‘s pink-camo version (gifted by Tristan Thompson on her 36th birthday) as well as Kim‘s paisley edition that she rocked over the summer.

In another set of videos, Kylie gave fans a closer look at the red hair and her natural, shorter length. “My real hair is cuuute. I gotta give it more love,” she wrote over the selfie-shot video, posted on Dec. 12. Kylie repped her hometown in a “City of Champions Crew” sweatshirt by streetwear brand Cherry Los Angeles ($185), Cartier LOVE hope earrings ($4,850), and a Dior logo necklace.