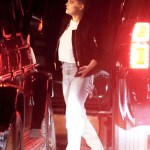 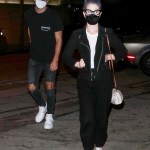 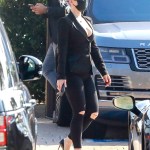 Kelly Osbourne looked so incredibly confident in her all black ensemble while on her way to a meeting! The stunner worked a blazer and fitted pants that effortlessly showed off her healthy weight loss. See the pic!

Kelly Osbourne was totally feeling herself on Sunday, October 11, when she stepped out for a business meeting in Malibu with TV producer Jeff Beacher. The TV personality, 35, looked super stylish in a monochromatic black ensemble, featuring a blazer that hugged Kelly’s curves and fitted pants, featuring ripped fabric at the knees. Kelly maintained the all black look by fashioning a pair of high heels and glasses, as well. Finally, she wore her signature purple locks in a ponytail, putting her own unique spin on the business look.

Kelly has really been showing off the results of her healthy weight loss since dropping 85 lbs. With each new outing, fans have seen Kelly fashion fitted looks that accentuate her figure perfectly. The stunner has been seen out and about in leggings and loose-fitting T-shirts, much like in the image below, since she dropped the weight. But along with proudly showing fans the results of her weight loss journey, Kelly has also gotten real about the decision she made to meet her ideal weight.

The starlet opened up about undergoing a gastric sleeve procedure in 2018 in order to help her achieve her health goals. “I had surgery. I don’t give a f**k what anyone has to say,” Kelly shared with the hosts of the Hollywood Raw podcast during her appearance on August 20. “I did it, I’m proud of it, they can suck sh*t,” she said, referencing any trolls or haters who dared to judge her.

The daughter of rock and roll royalty, Ozzy and Sharon Osbourne, went on the explain what her surgery entailed. “I did the gastric sleeve. All it does is change the shape of your stomach. I got that almost two years ago. I will never ever, ever lie about it, ever. It is the best thing I have ever done,” Kelly proudly proclaimed. While the surgery was definitely a major first step for Kelly on her weight loss journey, she was also incredibly candid on how the procedure is not the fix for weight loss; there also has to be a continued effort to exercise and eat healthier foods.

“The kind of surgery I had…if you don’t work out and you don’t eat right, you gain weight. All it does is move you in the right direction,” Kelly shared with the hosts. “So, anyone who’s thinking of doing something like this, really think about that,” she told listeners. “This has been two years of me working on this. Figuring out if I wanted to be in this [Hollywood] industry, figuring out if I was even capable of even losing this weight,” she further explained. “I did, and I figured out I wanted to keep going. I didn’t do this for anyone. It was a long process, and now I’m here and everybody is noticing.”