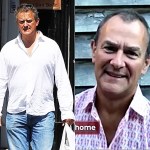 Kelly Osbourne showed off her fit figure when she stepped out to meet a friend for a lunch just one month after she revealed that she lost 85 lbs after privately undergoing gastric sleeve surgery two years ago.

Kelly Osbourne, 35, looked amazing when she was seen out and about on Sept. 25! The daughter of rocker Ozzy Osbourne, 71, and Sharon Osbourne, 67, was meeting up with a friend for lunch at West Hollywood’s Gracias Madre when she showed off her slender frame in a loose gray T-shirt and fitted black pants. She also wore black and white tie-up shoes, black framed glasses, and a black face mask as her light purple locks were tied up.

The outing comes one month after Kelly got attention for admitting to privately undergoing gastric sleeve surgery two years ago, which has resulted in her losing a whopping 85 lbs. “I had surgery,” Kelly stated in a Hollywood Raw interview. “I don’t give a f**** what anyone has to say. I did it, I’m proud of it, they can suck s****. I did the gastric sleeve.”

“All it does is change the shape of your stomach,” she continued. “I got that almost 2 years ago. I will never ever ever lie about it ever. It is the best thing I have ever done.” She also went on to explain that although it helped with her weight loss, she still needs to keep her body active to maintain a healthy physique.

“The kind of surgery I had…if you don’t work out and you don’t eat right, you gain weight,” she said. “All it does is move you in the right direction,” Kelly told the hosts. “So, anyone who’s thinking of doing something like this, really think about that.”

Kelly’s admission came just two weeks before she was seen on a different outing with a male friend on Sept. 3. She looked equally as great as her latest outing in a cute black cropped jacket over a white top and black leggings and looked confident as she walked to get lunch in Malibu. We look forward to seeing Kelly again in the future soon!