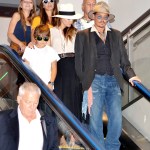 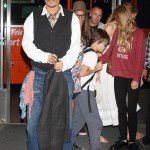 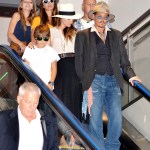 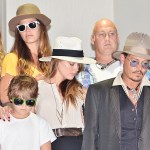 As Johnny Depp’s libel case against ‘The Sun’ over allegations that he beat Amber Heard rages on, his teenage son, Jack Depp, was spotted taking a holiday with his mom.

While things have gotten ugly between Johnny Depp, 57, and Amber Heard, 34, in their British legal battle, the scene was a pleasant one across the English Channel on Friday, July 17. Vanessa Paradis, 47, along with her and Johnny’s son Jack Depp, 18, was seen packing up a car to leave Paris. The singer-model covered her face while wearing plaid pants and suede boots. Her son, on the other hand, didn’t cover up his face and kept it casual with a sweatshirt and corduroy pants. Jack’s girlfriend, Camille Jansen, 20, apparently joined them, and together, they all went down to the coast in the south of France for some R&R.

Vanessa was involved with Johnny from 1998 to 2012. She was expected to testify in Johnny’s libel suit against The Sun, but the NY Daily News reports that his lawyers declined to call either her or Johnny’s ex, Winona Ryder, 48, to the stand. Johnny is suing The Sun’s parent company and executive editor, Dan Wootton, over an April 2018 article that declared him a “wife beater” for allegedly abusing ex-wife Amber. Johnny has denied the allegations, and though Winona didn’t testify in person, she submitted a witness statement that said the “idea that he is an incredibly violent person is the farthest thing from the Johnny I knew and loved.”

The lack of Winona hasn’t diminished the shock and awe of this trial. Johnny, in a statement, accused his ex-wife or “possibly one of her friends” defecated in their bed during an unspecified night, and cited this as one of the last straws in their marriage. She allegedly dismissed this as a “harmless prank.” Amber, after taking the stand, claimed Johnny would often accuse her of cheating on him with her co-stars. “He accused me of having affairs with each of my co-stars, movie after movie: Eddie Redmayne, James Franco, Jim Sturgess, Kevin Costner, Liam Hemsworth, Billy Bob Thornton, Channing Tatum; even women co-stars like Kelli Garner,” she said.

These cheating accusations are also a part of the $50 million defamation lawsuit Johnny filed against Amber in 2019. He alleges that, during their 2015 fight, she threw a vodka bottle at him and nearly severed his finger off. Amber claims that the injury was self-inflicted, and that Johnny allegedly cut it during a jealous rage over the rumors that she cheated on him with Billy Bob Thornton.

Johnny has denied all allegations of abuse. During this libel case, he also shot down the allegations that he “slapped” Amber after she made fun of his “wino forever” tattoo. “It’s not true. It didn’t happen… I didn’t hit her.”