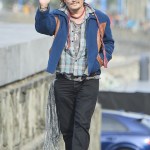 Winona Ryder leapt to ex-fiancé Johnny Depp’s defense again, testifying in a statement during his libel trial that he was never violent toward her during their relationship.

Winona Ryder did not appear virtually in court as planned, but submitted a powerful statement instead on July 16 to defend her ex-fiancé, Johnny Depp, in his libel suit against The Sun. The Stranger Things actress, 48, stated that Johnny, 57, never harmed her during their nearly four-year relationship, and that she refused to believe the “horrific allegations” against him.

“The idea that he is an incredibly violent person is the farthest thing from the Johnny I knew and loved,” Winona’s statement said. “I do not want to call anyone a liar but from my experience of Johnny, it is impossible to believe that such horrific allegations are true.”

Johnny sued The Sun‘s parent company and executive editor, Dan Wootton, for an April 2018 article that declared him a “wife beater” for allegedly abusing ex-wife Amber Heard during their relationship. The Pirates of the Caribbean star, who has vehemently denied ever hurting Amber, has already taken to the stand in his own defense. Winona’s virtual appearance comes during the second week of the three-week trial.

Winona and Johnny started dating in 1989, after meeting at the premiere of her film Great Balls of Fire. They famously co-starred in the Tim Burton classic Edward Scissorhands together in 1990, and got engaged that same year.  They amicably ended their engagement in 1993, and remained friendly for the next two decades. This is actually the third time that Winona has vouched for Johnny since he was accused of abuse. The actress reportedly filed a declaration in Virginia, where Johnny is suing Heard for $50 million for defamation, in March 2020.

Winona, according to court docs, stated, “I am aware of the violence allegations that have been made publicly for the last few years by Johnny Depp’s ex-wife Amber Heard. I knew Johnny very well years ago. We were together as a couple for four years, and I counted him as my best friend, and as close to me as family… I obviously was not there during his marriage to Amber, but, from my experience, which was so wildly different, I was absolutely shocked, confused and upset when I heard the accusations against him… He was never, never violent towards me. He was never, never abusive at all towards me.”

She told TIME in 2016, “He was never, never that way towards me. Never abusive at all towards me. I only know him as a really good, loving, caring guy who is very, very protective of the people that he loves. I wasn’t there. I don’t know what happened. I’m not calling anyone a liar. I’m just saying, it’s difficult and upsetting for me to wrap my head around it.”

Winona has actually been brought up in court already. Johnny denied an allegation from The Sun‘s lawyer that he slapped Amber when she allegedly made fun of his tattoo. Johnny famously had his “Winona Forever” ink on his arm changed to “Wino Forever” when they broke up, and Amber allegedly mocked him for falling off the wagon. Johnny denies even remembering the incident in question.

Johnny’s ex-partner, Vanessa Paradis, with whom he shares children Lily-Rose and Jack Depp, also submitted a statement to the court. “I have seen that these outrageous statements have been really distressing, and also caused damage to his career because unfortunately people have gone on believing these false facts,” her statement read. Vanessa was also supposed to appear virtually in court during the trial.