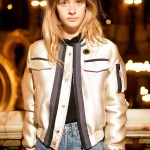 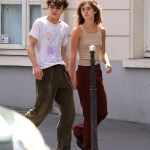 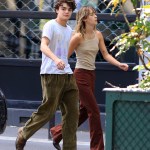 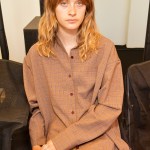 Love is in the air for Johnny Depp’s lookalike son Jack and his stunning girlfriend Camille Jansen!

Who doesn’t enjoy a little romance every now and then? Jack Depp, 18, and his model GF Camille Jansen, 20, were spotted being all lovey dovey with one another during an outing in Paris on Thursday, May 21. They walked around the City of Lights where the two locked arms while sporting some relaxed but stylish attire. It appears as if Jack might be following in his famous father Johnny’s footsteps when it comes to the types of women that he dates as the Oscar nominated actor has also been with gorgeous models like Amber Heard and Vanessa Paradis.

Here are 5 things you should know about Camille, both in and out of her blossoming relationship with her handsome boyfriend.

1: Bi-Coastal Beauty. Camille must be a busy girl with all the work she gets as she’s repped by Next Models in two different countries: The United States and France. She’s modeled for legendary designers including Giorgio Armani and has been striking poses all over the world in glamorous areas like the island of Capri.

2: Belt It Out. The French stunner also has a background in the world of music. She’s released a couple of songs over the past couple of years including the track “Sunny Days” which has been covered multiple times on YouTube.

3: Gone But Not Forgotten. Camille said in a 2017 interview that her personal hero was the late Amy Winehouse who died at the age of 27 in 2011. “I have been inspired by her music for years— I love that kind of soul and jazz that you really have to live to create,” she revealed.

4: No Makeup, No Problem. Camille’s super popular Instagram account, which boasts over 200,000 followers, is filled with photos of her rocking bareface in a variety of super colorful ensembles.

5: She’s Madly In ‘Love’. Things appear to be going swimmingly for Camille and her ‘love’ Jack as their relationship progresses. She posted a cute photo of them cuddled up on her couch while wishing him Happy Birthday in April.