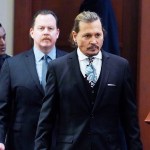 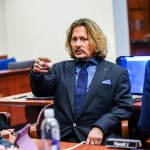 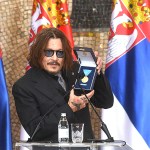 Who is Camille Vasquez? Here we breakdown everything to know about Johnny Depp’s lawyer (and potential new love interest) who’s emerged as one of the star litigators his trial against ex-wife, Amber Heard.

Amber Heard got incredibly emotional, as she recalled the first time that Johnny Depp allegedly hit her. She said she was shocked. “I thought he was joking,” she said.

Johnny’s Depp’s agent testified the mega-star was about to earn tens of millions for yet another sequel to ‘Pirates of the Caribbean’ before Amber Heard wrote her op-ed.

The actress made a video expressing her regrets about making light of the defamation trial between the two exes on her talk show.

Travis McGivern claimed he saw Amber Heard punch a ‘shocked’ Johnny Depp during an argument in March 2015 as he was questioned in the ongoing defamation trial.

The courtroom burst out in laughter after Johnny’s bodyguard was asked if he saw the actor’s penis.

Johnny Depp appeared to be grateful for the support as he waved with the window down, also marking the first time he saw the alpacas brought by fan to ‘brighten’ his day.