Johnny Depp cut off the tip off his finger in March 2015, according to estranged wife Amber Heard, then dipped the stump in blue paint and wrote a violent message on his mirror in a fit of rage while staying at a villa in Australia. CLICK BELOW to see the gruesome pic of Johnny’s severed finger. WARNING: the pic is very graphic.

Johnny and Amber were allegedly in a brutal fight at the time, when he accused her of cheating on him with someone named “Billy Bob”; he wrote the man’s name on the wall and mirror in a mixture of blood and paint, as well as the words “easy Amber.”

The graphic photos are more evidence for Amber’s domestic violence case against her soon-to-be ex-husband. She claims that during their stay at the villa, Johnny became extremely drunk and high on cocaine. Johnny allegedly cut off the tip of his finger after smashing bottles and windows, slicing himself on one of the glass shards. 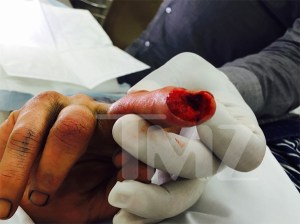 The “Billy Bob” message is interesting. In 2015, Amber starred in a film with Billy Bob Thornton, and she claims that Johnny accuses her of sleeping with the actor during filming. She denies this, as well as his other alleged claims that she cheated on him with other men.

As for the fact that Johnny noticeably isn’t missing any fingers, that’s because the digit was able to be saved. Johnny allegedly waited over 24 hours to get medical help, so his fingertip couldn’t be saved, but doctors used skin from his hand to sew a new one. Clever!

This is just another shocking, scary twist in Johnny and Amber’s divorce case. Amber has repeatedly stated that Johnny abused her, and now she’s coming out with alleged evidence, including these videos, and that frightening video of Johnny smashing bottles.

HollywoodLifers, are you shocked that Johnny cut off his own finger?