Taylor Swift and Joe Alwyn have been dating for more than four years, however they’re still one of Hollywood’s most mysterious couples. The pair rarely speak about each other publicly, and fans of the “Cardigan” singer have long decoded her lyrics in an effort to find clues about her British beau. The notoriously private relationship is a far cry from Taylor’s highly-publicized flings of the past, with the likes of Tom Hiddleston and Calvin Harris. Nevertheless, fans have still been able to sleuth out a few details about the adorable couple, so we’re looking back at the timeline of their romance! 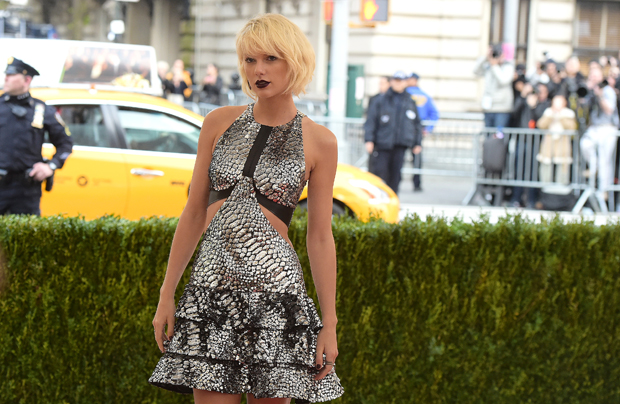 While neither Taylor nor Joe have ever confirmed exactly how they met, fans have theorized that her 2017 hit “Dress” described the couple’s first meeting at the 2016 Met Gala on Mat 6. In the song, she croons, “Flashback to when you met me, your buzzed cut and my hair bleached.” Taylor’s hair was infamously bleached bright blonde, and Joe, who attended as a guest of his co-star, sported a buzzcut. Although Taylor was in a relationship with Calvin Harris at the time, and would go on to date Tom Hiddleston briefly that summer, she attended a Kings of Leon concert in October 2016 which Joe was also at! Fans believe the pair reconnected that Fall at an after party in New York City.

The First Photos Emerge Of Taylor Swift & Joe Alwyn In 2017 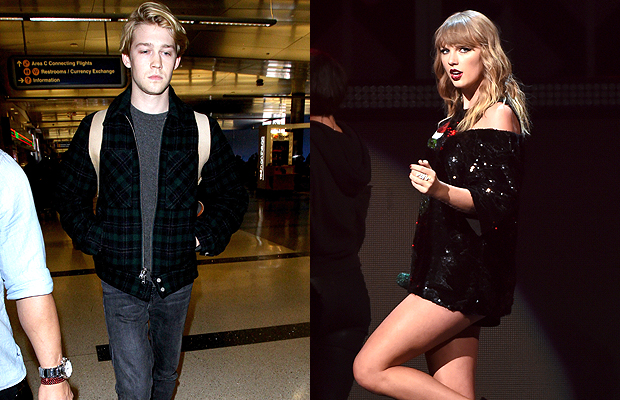 After speculation the pair were dating, fans finally got confirmation when paparazzi photos emerged of the new couple in June 2017. The duo were seen sitting on a balcony in Nashville, reportedly meeting Taylor’s parents for the first time. Just two weeks later, they were spotted again, this time in New York City. The couple attempted to shield themselves with oversized hoodies and sunglasses as they exited Taylor’s Tribeca apartment.

Joe Alwyn Speaks About Taylor Swift For The First Time 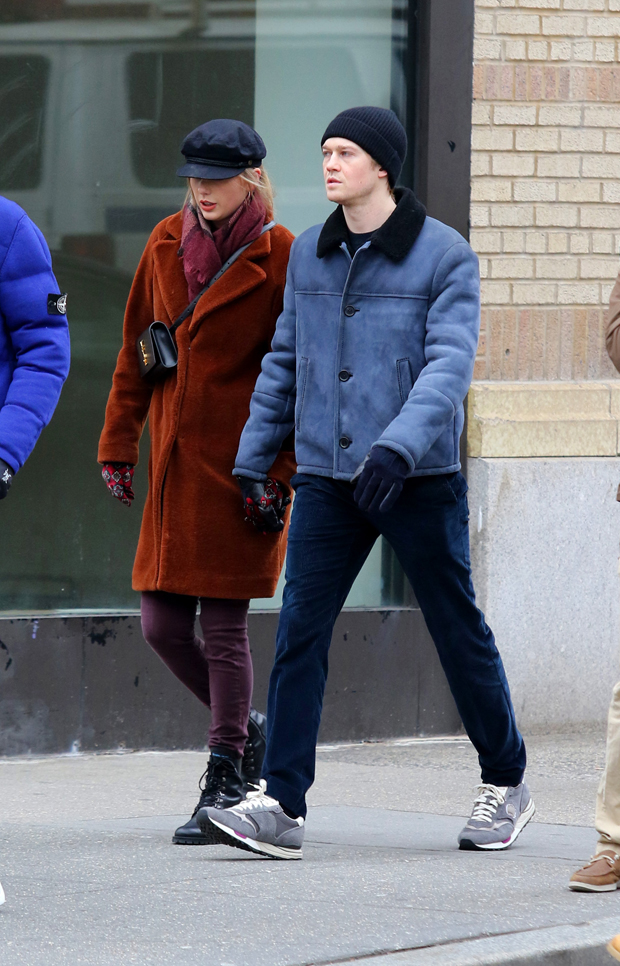 In the Fall of 2018, the British actor finally opened up about his girlfriend of more than one year. “I’m aware people want to know about that side of things,” he told British Vogue. “I think we have been successfully very private and that has now sunk in for people … but I really prefer to talk about work.” The following month, in an interview with GQ, he avoided the topic again, saying, “Someone’s private life is, by definition, private. No one is obliged to share their personal life.” For the first time, that December, he spoke more directly about Taylor when Esquire asked him if he asked his friends for guidance before jumping into the relationship.  “I didn’t seek out advice on that,” he said. “Because I know what I feel about it. I think there’s a very clear line as to what somebody should share, or feel like they have to share, and what they don’t want to and shouldn’t have to.” 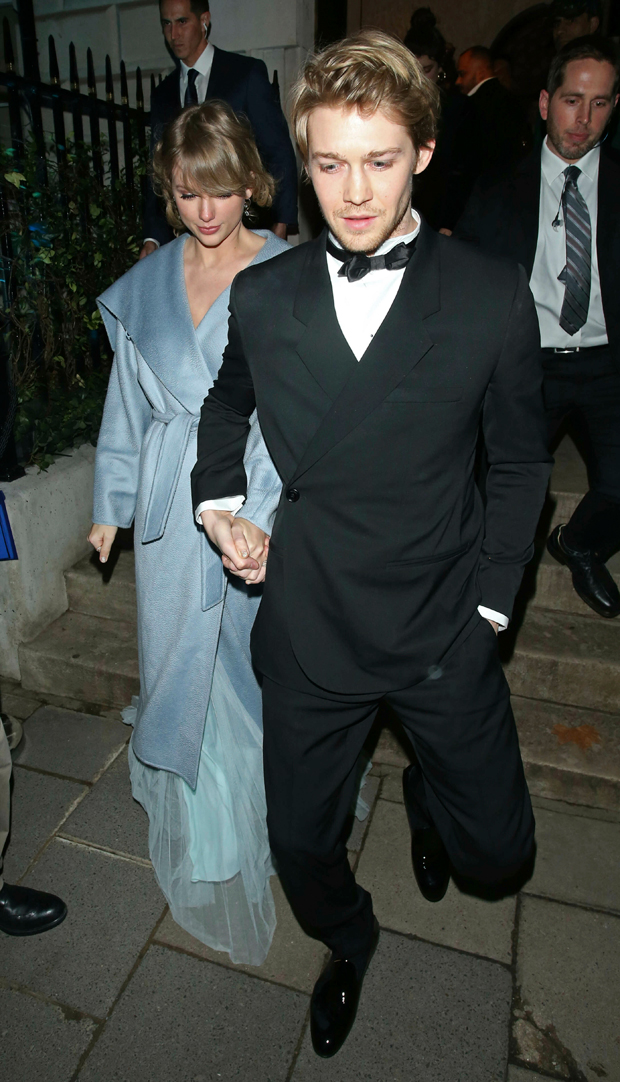 In February 2019, the couple stepped out at the BAFTAs after party in London. Taylor stunned in a pale blue Stella McCartney gown, while Joe looked dapper in a suit and tie. The pair were even photographed walking hand-in-hand, which was a rare occurrence for the couple who often shied away from attending public events together. 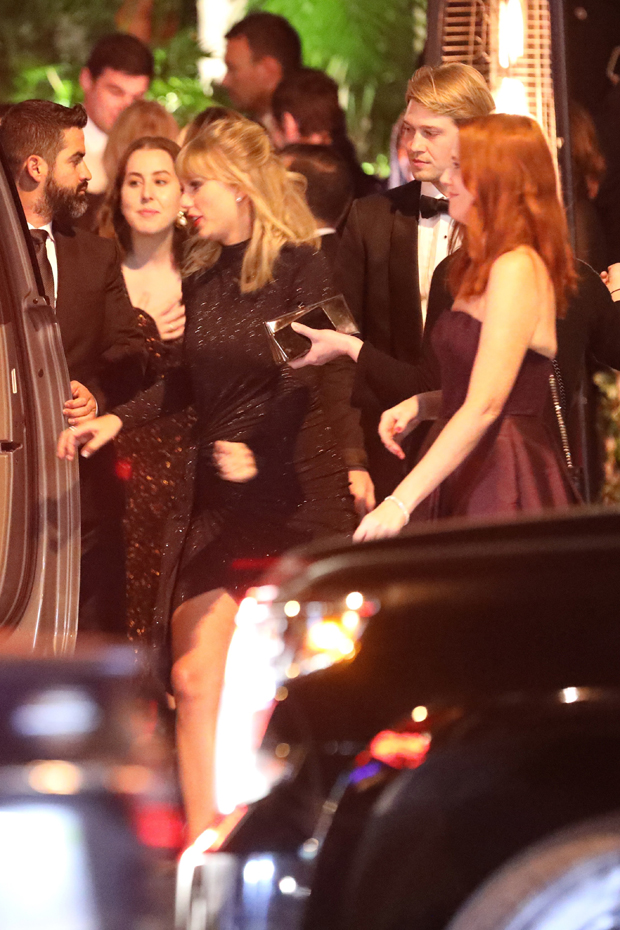 Perhaps their most high-profile event to date, both Taylor and Joe attended the 2020 Golden Globe Awards. The Cats star was a presenter and nominee for Best Original Song in a Motion Picture, for her collaboration with Andrew Lloyd Webber on “Beautiful Ghosts.” While they didn’t walk the red carpet together, attendees captured the couple taking their seats next to each other inside the ballroom, and they were later photographed leaving the after party together. 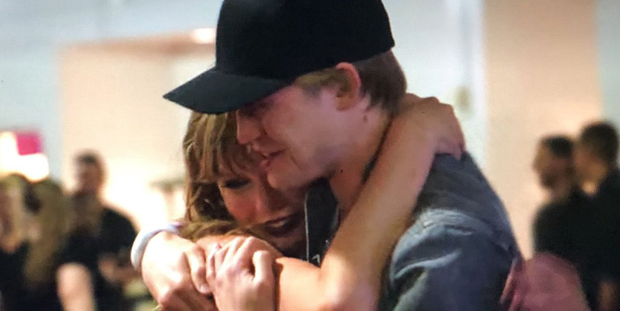 After almost four years of dating, fans got a rare glimpse into the couple’s relationship during her January 2020 documentary, Miss Americana. Taylor spoke about what made her fall in love with Joe in 2016, following her very public feud with Kim Kardashian, which essentially sent her into hiding for a year. “I felt alone, I felt really bitter,” she explained. “I felt sort of like a wounded animal lashing out. I figured I had to reset everything. I had to reconstruct an entire belief system for my own personal sanity. I also was falling in love with someone who had a wonderfully normal, balanced life.” Taylor continued, “We decided together we wanted our relationship to be private. Even though it [Swift’s public image in 2016] was really horrible, I was happy. But I wasn’t happy in the way I was trained to be happy. It was happiness without anyone else’s input. We were just, happy.”

After Taylor dropped her surprise album Folklore in 2020, fans theorized that one of her writers named William Bowery was actually a pseudonym for Joe. She eventually confirmed the theory, and revealed Joe was actually a very talented songwriter! She also opened up about their relationship when she sat down with Beatles legend Paul McCartney for a Rolling Stone story in December 2020. She discussed the penultimate song on her album Folklore, titled “Peace”. “’Peace’ is actually more rooted in my personal life. I know you have done a really excellent job of this in your personal life: carving out a human life within a public life, and how scary that can be when you do fall in love and you meet someone, especially if you’ve met someone who has a very grounded, normal way of living,” she said to Paul, adding that Joe helps her feel grounded. “I think that in knowing him and being in the relationship I am in now, I have definitely made decisions that have made my life feel more like a real life and less like just a storyline to be commented on in tabloids.” We can’t wait to see what’s next for Taylor and Joe!