Megan Thee Stallion’s career is absolutely on fire! With so much interest in the ‘WAP’ rapper, take a look back at some of her rumored and confirmed past relationships.

Megan Thee Stallion has reached a completely new peak in her career. The “Hot Girl Summer” rapper, born Megan Pete, earned her first Grammy nominations (notably for her “Savage” remix with Beyoncé), reached number one on the Hot 100, and collaborated with Savage X Fenty. But as her star has risen, interest in Meg’s personal life has grown, as well. As such, let’s take a look back at the men that Megan Thee Stallion has been linked to thus far in her career.

In July 2019, Megan went public with her relationship with rapper Moneybagg Yo. The two collaborated on the song “All Dat,” before seemingly confirming their romance via Instagram Live during the summer of 2019. However, the relationship fizzled out after a few short months, with Moneybagg Yo, born Demario DeWayne White Jr., confirming the split during his January 2020 appearance on Rap Life Radio With Ebro Darden. Moneybagg confessed that the romantic aspect of their relationship simply “didn’t work.” But circumstances between the pair remained relatively amicable.

In early February 2020, rumors circulated that Megan was romantically involved with rapper G-Eazy after a video of the “I Mean It” rapper, born Gerald Earl Gillum, licking Meg’s face circulated on social media. Fans were shocked by the potential romance, but Meg was quick to shut down any form of speculation on Twitter. “Lol alright nowww y’all got all y’all jokes out,” Megan began her February 2020 tweet, before adding, “but I am not f***ing G Eazy.”

During the summer of 2020, Megan Thee Stallion’s relationship with rapper Tory Lanez was put under scrutiny after Tory was charged with “one felony count each of assault with a semiautomatic firearm – personal use of a firearm – and carrying a loaded, unregistered firearm in a vehicle,” according to documents filed by the Los Angeles District Attorney’s office in October 2020. Tory also faces a gun allegation and that he personally inflicted great bodily injury. Once the incident in July 2020 occurred, in which Megan was shot in the foot, she held her ground and set the record straight on her connection to Tory.

In a powerful, emotional essay published by The New York Times, Megan confirmed that she and Tory were not romantically involved. “We were not in a relationship. Truthfully, I was shocked that I ended up in that place,” Megan wrote. Sadly, this isn’t the only time Meg’s stardom has led to assumptions about her personal life, and she’s honestly over it.

“You got to be careful what you’re doing in public because sometimes people spin it like it’s something else,” she told Rolling Stone in a February 2020 profile. “People think that if I’m hanging out with anybody, it got to be, ‘Oh, they’re having sex.’ Why can’t I just be turnt up with my friend tonight?” Megan has proven to be a formidable presence in the music industry. Regardless of what’s going on in her personal life, fans know that the Tina Snow and Good News hitmaker will keep the hits coming and use her platform to make a difference. 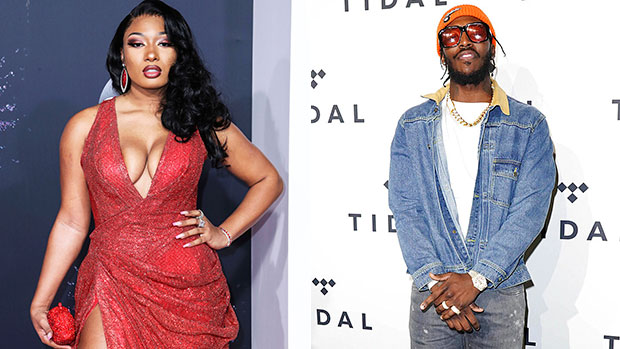 Megan’s latest beau is Pardison Fontaine! The 31-year-old singer songwriter, born Jordan Kyle Lanier Thorpe, confirmed the news just hours after the “WAP” singer was revealed as the cover star of Harpers Bazaar‘s March 2021 edition on February 19. The musician is best known for his collab with Cardi B on his track, ”Backin’ It Up”, and first confirmed his new romance in February 2021. SOME TIMES YOU JUST GOTTA DO THE MOST,” he captioned a Feb. 19 Instagram post, which featured a series of pics and videos. The first clip showed Pardi surprising Meg with a private plane, under the guise of the pair going to lunch. “Where are we going?” she asks. It was followed by a snap of the jet covered in red and pink roses, and a photo of their February 14 menu which was titled “Pardi With A Hottie.” The final pic showed Megan laying on a bed, wearing a body-con dress, surrounded by rose petals, champagne and balloons.