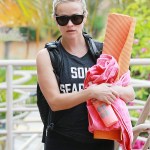 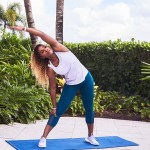 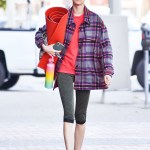 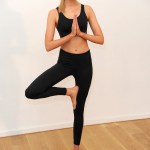 Many A-list stars swear by yoga as part of their workout ritual. From Britney Spears to Kaley Cuoco, take a look at the ones who can’t get enough of this popular fitness trend.

Yoga is something that millions of people have loved taking part in for decades. The physical, mental, and spiritual practices or disciplines that encompasses it is also something that tons of stars enjoying doing on a daily basis. Some have been spotted out and about with their mats in their hands while others have posted videos or photos of them doing yoga for their fans and followers to ogle over and double tap.

Kaley Cuoco, 34, is a proud yoga-holic. “Doing yoga five times a week has transformed my body,” she said in a 2017 interview. “I love being toned and having muscle; it’s so sexy and beautiful. And I owe it 100% to yoga.” Whatever she’s doing is clearly paying off as the blonde bombshell showed off the results of her yoga exercises by putting her abs on display while on the set of The Big Bang Theory last year.

Pop icon Britney Spears, 38, is known for many things, one being how she’s remained in tiptop shape over the course of her illustrious 20-plus year career. The “Toxic” singer includes yoga in that fitness routine which she excelled in at the beach in August 2020 when she posted an Instagram video of her doing sun salutations and other positions while not even using a mat or towel.

Katy Perry, 35, who just welcomed her first child with fiance Orlando Bloom, 43, has been a fan of yoga for years. She even went as far as to post an almost 90-minute video of her doing a variety of its exercises in May 2017 that was livestreamed for thousands of people to see!

The work we are doing now is undeniably essential to our collective progress, but the side effects can be draining. We have decided to continue with our #FitnessFriday takeover, and this week, we are talking about the ways I incorporate stretching and yoga into my daily routine. Bringing that much needed attention to my body with something like a yoga wheel helps manage my stress levels and releases the negative energy that can often take over when I feel overwhelmed. Head to @womenshealthmag now to learn more ♥️

Halle Berry, 54, often posts a ton of photos and videos of her engaging in some type of workout, leaving her fans totally inspired. The Oscar-winning actress shared a snap of her in June 2020 showing off her most flexible side in a fierce yoga pose taken amid a grassy background.

Before shaking up the Royal world across the pond, Meghan Markle was known for many things, one being her devotion to the world of yoga. “Yoga is my thing. My mom is a yoga instructor, and I started doing mommy-and-me yoga with her when I was seven,” she said in a 2016 interview long before marrying Prince Harry. “I was very resistant as a kid, but she said, ‘Flower, you will find your practice – just give it time.’ In college, I started doing it more regularly.”

Be sure to click-through the gallery below for more stars who simply love yoga!