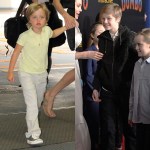 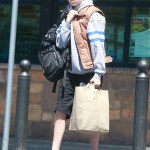 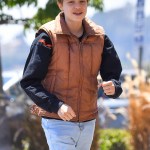 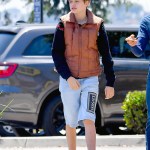 Bio:
Shiloh Jolie-Pitt (born Shiloh Nouvel Jolie-Pitt, in Namibia, Africa on May 27, 2006) is the first biological child of Brad Pitt and Angelina Jolie, and she is an actress. Shiloh is Brad’s first child, and at the time she was Angelina’s third child. Angelina had adopted Maddox and Zahara in 2002 before becoming pregnant with Shiloh. Her film credits include, Kung Fu Panda 3 and The Curious Case of Benjamin Button. Shiloh has become a Hollywood child icon for her fashion sense and young talents. She is always traveling all over the globe with her famous parents, and has visited Italy, Cambodia, Ethiopia, New Orleans, India and France.

Best Known For:
Shiloh Jolie-Pitt is best known for being the child of on-screen veterans, Brad Pitt and Angelina Jolie.

Personal Life:
Shiloh Jolie-Pitt has five siblings — Pax, Zahara, Maddox, and twins, Vivienne and Knox. Angelina filed for divorce from Brad on September 19, 2016 and asked for full physical custody of all six children.

Oh no — what happened to Shiloh Jolie-Pitt? The teenage daughter of Angeline Jolie and Brad Pitt was spotted on crutches while out and about with her mom and younger sister, Vivienne.

Brad Pitt’s kids were so thrilled for their dad on his Oscar win for ‘Once Upon A Time In Hollywood’ and loved their on-air shout out!

Angelina Jolie spent some quality time with her daughters, Shiloh and Zahara Jolie-Pitt, on Dec. 22, and the girls looked SO grown up on the family outing.

A special guest joined Angelina Jolie and four of her children when they were spotted hanging out in the Canary Islands over the weekend!

‘Nothing’ makes Angelina Jolie ‘smile more’ than seeing her kids ‘being fully themselves,’ like when they take charge of their personal wardrobes! The ‘Maleficent’ star shared her parenting insights in the December/January issue of ‘Harper’s BAZAAR.’

Angelina Jolie has been sure to prioritize her children alongside her prosperous career. Angelina’s adorable kids have been stealing the show during the press tour for her movie ‘Maleficent: Mistress of Evil.’

A glam squad was filmed getting Angelina Jolie and her kids red-carpet ready for the big premiere of ‘Maleficent: Mistress of Evil’ on Sept. 30. The Jolie-Pitts’ many pets even make cameos!