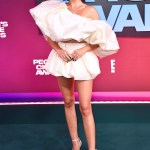 Bio:
Sarah Hyland (born Sarah Jane Hyland in New York, New York on November 24, 1990) is an American actress who is best known for her role as oldest sibling Haley Dunphy on the ABC sitcom Modern Family. She and the rest of the show’s cast won the Screen Actors Guild Award for Outstanding Performance by an Ensemble in a Comedy Series from 2011 through 2013. Sarah started acting at 5-years-old playing Howard Stern’s daughter in the film Private Parts. Other movies she has starred in include the Disney Channel Original Movie Geek Charming with her ex Matt Prokop and Struck by Lightning co-starring Chris Colfer.

Best Known For:
Sarah Hyland is best known for her role as oldest sibling Haley Dunphy on the ABC sitcom Modern Family.

Personal Life:
Sarah Hyland’s first publicized relationship was with Matt Prokop, whom she met while auditioning for High School Musical 3: Senior Year. They went on to costar in the Disney Channel Original Movie Geek Charming. The couple lived together from 2011 until 2014 until they had a contentious split. Sarah was granted a temporary restraining order against Matt after he assaulted and threatened her and her dog on September 19, 2014.

‘Jersey Shore’: Angelina Admits She Only Slept With Chris Once In Their 2 Year Marriage

As ‘Modern Family’ comes to an end, we’re looking back on how our two favorite on-screen sisters from the show, Sarah Hyland and Ariel Winter, showed off their fit figures through the years!

Sarah Hyland took to Instagram to share an adorable video of her and fiance Wells Adams hilariously answering questions about each other with their eyes closed as a part of Tik Tok’s popular couples challenge.

Sarah Hyland has urgently spoken out about the importance of self-quarantining during the COVID-19 pandemic after her two kidney transplants. Dr. Tania Dempsey MD agrees.

Sarah Hyland looked fabulous when she rocked her naturally long, curly hair down for a workout in LA on March 11!

Ariel Winter and Luke Benward cozied up together at the wrap party for ‘Modern Family’s final season on February 23. She took a seat on her boyfriend’s lap while alongside Sarah Hyland, who did the same with fiance Wells Adams!

Sarah Hyland had onscreen sister Ariel Winter’s back on Instagram when a commenter had less than nice things to say about her sexy dress.

Sarah Hyland and Ariel Winter looked so sexy as they posed at the last-ever wrap party for ‘Modern Family’ and declared each other ‘Dunphy’s’ forever!