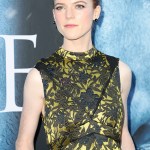 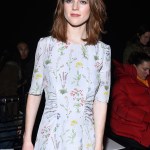 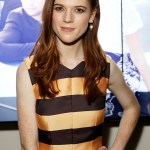 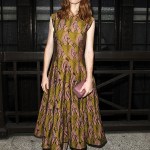 Bio:
Rose Leslie (born Rose Eleanor Arbuthnot-Leslie in Aberdeen, Scotland on February 9, 1987) is a Scottish actress. One year after graduating with honors from the London Academy of Music and Dramatic Art, Rose appeared in the movie New Town. But it wasn’t until her roles in the hit TV shows Downtown Abbey and Game of Thrones that she became a household name. She has since appeared in Now Is Good, The Great Fire and The Good Fight. In her most recent project, she tried her hand at voice-acting for the video game Echo. Besides acting, Rose enjoys skiing, archery, tennis and rock climbing.

Best Known For:
Rose Leslie is best known for playing Ygritte on Game of Thrones.

Personal Life:
Rose has only been romantically linked to one Hollywood hottie since her rise to fame – Kit Harington, her Game of Thrones costar and fiancee! The two got engaged in 2017 and are rumored to tie the knot in June 2018. “If you’re already attracted to someone, and then they play your love interest in the show, it’s becomes very easy to fall in love,” Kit said in a 2016 Vogue Italia interview.

The ‘Game of Thrones’ stars had a wonderful day as they took in a wide variety of music at the epic Glastonbury Festival in the UK.

The ‘Game Of Thrones’ stars have come so far since they first met on the set of the iconic HBO fantasy show. Look back on some of the major moments of their relationship.

And baby makes three! Congratulations to ‘Game Of Thrones’ stars Rose Leslie and Kit Harington, who have welcomed their first child together.

Rose Leslie is finally talking about her first pregnancy, and how she and husband Kit Harington ‘can’t wait’ to meet the new member of their family.

Kit Harington and Rose Leslie are totally relationship goals. They shined on the red carpet at the ‘Game of Thrones’ final season premiere, but that epic event wasn’t the first time Kit and Rose made our hearts melt with their love.

‘The Good Wife’ spinoff, ‘The Good Fight,’ is going to be extra steamy. In the first teaser for the new show, Rose Leslie’s character turns up the heat in a super hot lesbian sex scene. Plus, Diane Lockhart is more fierce than ever. Click to WATCH!

What on earth is going on here? Even though they famous co-stars broke up in 2013, they looked like a couple when they landed at LAX on July 25, and we are dying to know if they are back together!
Kit Harington and Rose Leslie make such a cute couple, don’t they? We were so happy to see them walking through the Los Angeles International Airport together, even though they made sure to show no PDA.