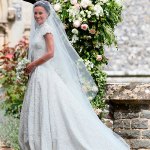 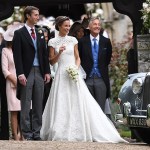 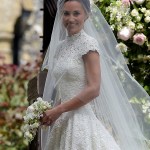 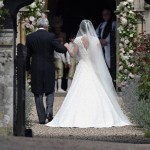 Bio:
Pippa Middleton (born Philippa Charlotte “Pippa” Middleton in Reading, Berkshire, England on September 6, 1983) is the younger sister of Kate Middleton, Duchess of Cambridge, who is the wife of Prince William. Pippa was the Maid of Honor at their April 2011 wedding. Along with older sister Kate, she also has a younger brother, James. She grew up in Bradfield, Southend before moving to Bucklebury, Berkshire. She attended St. Andrew’s School and Downe House School, before attending Marlborough College on a sports scholarship. She graduated from University of Edinburgh with a degree in English Literature. Pippa worked in PR after college but current works at her parent’s party planning company Party Pieces, and also edits the web magazine The Party Times. Pippa’s first book, Celebrate: A Year of Festivities for Families and Friends, went on sale in the US in October 2012. The book is described on Amazon: “In her first book, Middleton reveals the secrets to hosting a successful party with recipes, tips and detailed instructions on how to throw a memorable event.” Pippa came under fire in April 2012 after she was photographed riding in a car where the driver pointed a gun at photographers following them.

Best Known For:
Being the younger sister of Kate Middleton. After the Royal Wedding, everyone was talking about her body, specifically her butt, which was showcased in her white maid of honor dress.

Personal Life:
Pippa was in a relationship with banker Alex Loudon for three years until they split in 2011. Since then, she has been linked to the Duke of Northumberland’s son, George Percy. In 2016, she became engaged to James Matthews, a wealthy British financier.

Beach day! Pippa Middleton joined her family in the Caribbean on Dec. 31 and looked fit and happy enjoying some sun and sand before ringing in the New Year.

Hooray! There are so many adorable babies in this royal fam that we can barely keep track of them all — but we wouldn’t want it any other way. We can’t wait to find out more about Pippa and James’ newest little addition!

Pippa makes pregnancy look perfect! The mom-to-be has been putting her baby bump on full display lately in gorgeous dresses. See for yourself!

Pippa makes pregnancy look so good! Her first baby is coming sooner rather than later, and she’s sharing all her secrets for maintaining her fit frame until then.

How does Pippa Middleton make pregnancy look so good?! See photos of her flaunting her growing baby bump here!

Wedding season is here and stars like Jessica Chastain have been tying the knot all over the world in stunning ceremonies! We’ve rounded up the most glamorous nuptials so far in 2017!

Obsessed with Pippa Middleton’s wedding? Even if you don’t have a royal budget you can still throw a reception fit for a queen — here’s how.