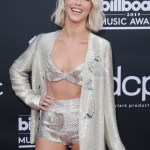 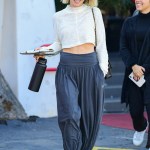 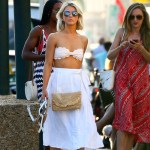 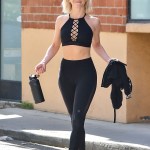 Bio:
Julianne Hough (born Julianne Alexandra Hough in Sandy, Utah on July 20, 1988) began on Dancing with the Stars as a professional dancer. However, after eight seasons, she decided to concentrate on her singing and acting career. Her self-titled country album landed at No. 1 on the Top Country Albums chart. She then went on to acting, starring in Burlesque then landing the leads in the remake of Footloose, Rock of Ages, Safe Haven, and the live TV musical Grease.

Best Known For:
Julianne Hough began known after eight seasons of Dancing with the Stars, then moving on to singing and acting — she landed the lead in Footloose, Rock of Ages, and Safe Haven. She also played the lead of Sandy in FOX’s live TV musical production of Grease.

Personal Life:
Julianne Hough began dating TV personality Ryan Seacrest in April 2010. However, after two years of dating, they ended their relationship in March 2013 due to Ryan’s constantly busy work schedule. Julianne started dating NHL hockey player Brooks Laich in Dec. 2013. They got engaged on Aug. 18, 2015. They were married on July 8, 2017.

Charitable Causes:
Julianne Hough has participated in the Love Your Melon challenge, which raises awareness for children with cancer.

Julianne Hough is thrilled to gain a sister in Hayley Ebert and plans to help with wedding planning in any way she can, a source tells HollywoodLife EXCLUSIVELY.

Dancer Julianne Hough, 33, showed off her dance moves on an Instagram video posted on June 11.

Why isn’t she president? Lilli Cooper stars in one of Broadway’s newest productions from 28-year-old playwright Selina Fillinger, ‘POTUS.’

Hello, Velma and Roxie! Julianne Hough teamed up with Oscar nominee Ariana DeBose for a sexy performance of ‘All That Jazz’ from ‘Chicago’ during the ‘Step Into…the Movies’ special.

The exes got along well while Julianne Hough and her brother Derek stopped by ‘On Air With Ryan Seacrest,’ almost a decade after Ryan and Julianne’s breakup.