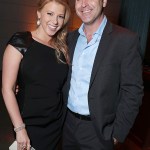 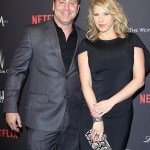 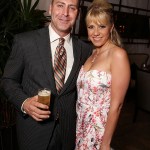 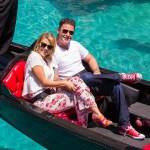 Best Known For:
Jodie is best known for her iconic role as Stephanie Tanner on the beloved television sitcom Full House. She is currently filming for the show’s spinoff, Fuller House.

Personal Life:
Jodie wrote a memoir in 2009 called unSweetined, which chronicled her downward spiral of alcohol and drug abuse that began once Full House wrapped. She began using methamphetamine after Full House ended, but she’s now in recovery. When she was 20, Jodie married her first husband, Los Angeles Police officer Shaun Holguin. They divorced in 2006 and she remarried 2007. Her second husband, Cody Herpin, was a film transportation coordinator. They have one daughter together but they divorced in 2010. She married Morty Coyle in 2012 and together, she and Morty share another daughter. Morty and Jodie divorced in 2013. Jodie then got engaged to Justin Hodak in January 2016, but announced they separated in March 2017.

John Stamos presented Jodie Sweetin with a Writers In Treatment’s Experience, Strength and Hope Award at an event on Feb. 28, and he gushed about how she inspired him to get sober almost four years ago.

Jodie Sweetin, AKA Stephanie Tanner from ‘Full House’ was just a little girl when she filmed the classic TV show! Now, she’s addressing shocking rumors that she slept with co-star John Stamos. John Stamos may be his real name, but he’ll always be Uncle Jessie to us. The Full House fan favorite actor recently celebrated…

More than eight years after their split, Jodie Sweetin and Cody Herpin have come up with a new child support agreement — and it means the ‘Fuller House’ star will have to pay her ex $1,400 more a month until their daughter, Zoie, turns 18!

The internet is NOT happy with Miley Cyrus. The ‘Wrecking Ball’ singer is under fire after posting photos of ‘Fuller House’ star Jodie Sweetin straddling a guy. Fans are furious with Miley and believe she is ‘mocking’ a ‘dark time’ in Jodie’s life.
Miley Cyrus, 23, may have just taken things too far. The starlet posted racy pics of Fuller House’s Jodie Sweetin, 34, straddling a guy, and now fans are lashing out at Miley. Some fans think Miley is “mocking” Jodie and think she has “reached a new low.” OMG!

Tyler Henry is working his magic on Jodie Sweetin. The ‘Full House’ alum stars on this week’s episode of ‘Hollywood Medium with Tyler Henry,’ and we have an exclusive sneak peek of her connecting with her Grandmother. Watch the video here.
Tyler Henry, known as the Hollywood Medium on E!’s hit show, definitely has a tough job — and with Jodie Sweetin, he really surprised her. On the episode, set to air this Sunday at 10PM ET, Tyler connected dJodie with her late grandmother to let her know how “special” she thought she was. With Jodie’s rocky past, her grandmother also wanted to give her a message about her status today. Watch here!