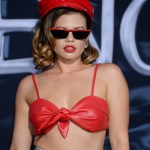 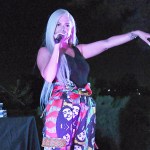 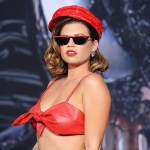 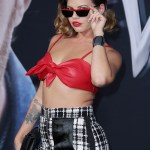 Bio:
Chanel West Coast, born Chelsea Dudley, on September 1, 1988 is a Russian-American rapper, singer, actress, model and television personality who gained fame from appearing on Rob Dyrdek’s Fantasy Factory and Ridiculousness. She is signed with Young Money Entertainment and released her “Now You Know” mix tape in July 2013.

Best Known For:
Chanel is best known for being a panelist on Fantasy Factory and Ridiculousness.

Personal Life:
Chanel filed for bankruptcy in March 2014. Her court documents showed that she was over $44,000 in debt. She was also rumored to be romantically involved with Justin Bieber. On Aug. 4, she was arrested for battery after she reportedly got into a fight with another woman outside the L.A. 1OAK nightlcub.

Charlamagne Tha God set off Chanel West Coast during a heated episode of ‘Ridiculouness’ on June 15. He called her a ‘whack rapper’ and she spit her entire resume in his face! The argument was so tense that Rob Dyrdek admittedly couldn’t control it!

Not a lot of people really know what caused Chanel West Coast to be arrested on the night of Aug. 4. There have been rumors that the rapper got into a fight with a girl at 1OAK in West Hollywood, Calif., but Chanel tells HollywoodLife.com EXCLUSIVELY what went down that night.
Chanel West Coast, 26, is saying she’s innocent the night of her arrest after a night out with her friends in West Hollywood, Calif. It was reported that the rapper got into a physical altercation with another woman at the club, but Chanel tells HollywoodLife.com EXCLUSIVELY that isn’t the case.

Is she gone? Chanel West Coast was arrested for fighting on August 4 and now her MTV gig may be in doubt. HollywoodLife.com has the EXCLUSIVE on how this latest incident will effect her future as a host of ‘Ridiculousness’.
Has Chanel West Coast, 26, finally gone too far? The rapper and TV show host caused a major scene at 1OAK nightclub in West Hollywood, CA, when she was arrested for allegedly fighting with patrons and a security guard. Now fans are asking if her late night tirade will cost her, her hosting gig on MTV’s Ridiculousnes. HollywoodLife.com has the EXCLUSIVE on whether she still has a future with the show.

Wow, apparently no one feels bad for Chanel West Coast. Although the ‘Ridiculousness’ star gave proof of her injuries after her crazy arrest in West Hollywood on Aug. 4, fans are calling Chanel out for her diva behavior.
Chanel West Coast, 26, got quite the opposite reaction when she shared her pictures of her horrible bruises stemming from her arrest. Instead of getting sympathetic notes, the MTV star was blasted for her ridiculous behavior when she was handcuffed. Read their words here!

‘Ridiculousness’ host Chanel West Coast got herself into a ridiculous situation last night, Aug. 4, after allegedly fighting with another woman at 1OAK nightclub as well as supposedly assaulting security officers at the West Hollywood club.
Chelsea “Chanel” Dudley, 26, went down kicking and screaming at 1OAK in West Hollywood, CA, and supposedly assaulted security officers there. According to reports, Chanel got into a brawl with a girl inside the club, and was quickly kicked out — only to allegedly fight outside!

Don’t mess with Chanel West Coast! The ‘Ridiculousness’ star caused a major scene at Coachella when she screamed at security guards for not letting her into the festival’s VIP area. Watch her meltdown here!
Chanel West Coast, 26, was NOT happy when she was turned away from the “artist’s entrance” area at Coachella on April 11. The rapper and reality star threw a hysterical fit at security when she wasn’t getting her way, and it was all captured on camera. Yikes!

The rapper and panelist on MTV’s ‘Ridiculousness’ filed for bankruptcy and now HollywoodLife.com has obtained the court documents that show she had over $44,000 dollars in debt!
Chanel West Coast, 25, who is signed to Young Money, needs her upcoming album to do well because her financial future depends on it! HollywoodLife.com has obtained the documents which Chanel, whose real name is Chelsea Dudley, filed in 2012. In these docs, Chanel stated that she owed thousands of dollars in unpaid legal fees, and bills.