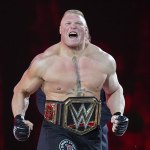 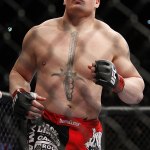 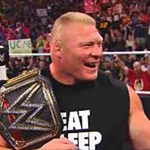 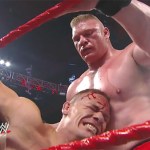 Bio:
Brock Lesnar, born on July 12, 1977 in Webster, South Dakota, is an American professional wrestler signed with the WWE. While enrolled at the University of Minnesota in 2000, he won the NCAA individual heavyweight wrestling championship in 2000. He debuted on Raw in March 2002. In 2004, he left the WWE to pursue a career in the NFL but returned to professional wrestling in 2005, and then started a career in mixed martial arts in 2006. In October 2007, he signed with the UFC where he earned the UFC Heavyweight Championship in Nov. 2008. Finally, in 2012, he returned to the WWE. On April 6, 2014, he broke The Undertaker’s previously-undefeated WrestleMania streak.

Ahead of the ‘WrestleMania when the world stood still,’ Drew McIntyre weighs in on why fans ‘won’t ever forget’ his match with Brock Lesnar. He also shares his thoughts on Roman Reigns pulling out of the show.

Get ready for ‘The Beast 2.0?’ Fans were buzzing amid rumors that Luke Lesnar, the son of WWE’s Brock Lesnar, was following in his father’s footsteps. Here’s what you need to know.

Calling all WWE fans! Could we FINALLY be getting the Brock Lesnar and Bill Goldberg rematch we’ve been longing for? In an EPIC new video, Brock ferociously calls out Bill saying he’s ‘next’ and the internet is freaking out! Watch his explosive message here!

UFC and WWE giant Brock Lesnar is innocent of doping, according to an alleged teammate! The Beast reportedly has severe asthma, and taking his inhaler is allegedly what made him fail the drug test! Click through for details!

The highly-anticipated match between Brock Lesnar and Mark Hunt at UFC 200 is just a few weeks away! And while Brock is confident in his big comeback, former UFC champion, Chuck Liddell, tells HollywoodLife.com EXCLUSIVELY that he thinks the WWE star is in over his head.
Chuck Liddell, 46, thinks Brock Lesnar, 38, has one BIG problem when it comes to his upcoming match at UFC 200 — he’s afraid to get a punch! The former MMA fighter and UFC champ talked to HollywoodLife.com EXCLUSIVELY about how he thinks Brock will do against Mark Hunt on July 9…and he doesn’t have too much confidence in him.

All hell broke loose between The Undertaker and Brock Lesnar at ‘SummerSlam!’ During their Aug. 23 grudge match, these two pro-wrestling titans had a bloody and brutal fight. It clearly took its toll on the Undertaker, who collapsed after the match was over! Yikes! Click to watch!
Though The Undertaker, 50, was the winner of his SummerSlam match with “The Beast” Brock Lesnar, 38, his victory may have come at a huge cost. After receiving a ton of punishment from Brock, including multiple “F5” finishing moves, The Undertaker collapsed on his way to the backstage area! Is he okay?

The Deadman is back! The WWE Universe hasn’t seen The Undertaker since March, but he made his return at WWE’s ‘Battleground’ on July 19. The Undertaker confronted Brock Lesnar and cost him the Heavyweight Championship, setting up a possible epic match at ‘SummerSlam!’
If fans thought the feud between Brock Lesnar, 38, and The Undertaker, 50, was over, they were wrong — dead wrong! The WWE’s undead phenom returned during the main event of Battleground, battling Brock and hinting at a huge match at SummerSlam! Wow! In an EXCLUSIVE interview with HollywoodLife.com, the WWE’s Stephanie McMahon, 38, said that fans would be excited with the SummerSlam line-up. She wasn’t kidding!