Khloe Kardashian will do whatever it takes to stand up for her family, and on Oct. 5, she came to Kim Kardashian’s defense after a social media post from Kanye West. In his message, Kanye clapped back at Gigi Hadid, who had called him out for wearing a White Lives Matter shirt and making disrespectful comments about Gabriella Karefa-Johnson. “I wonder what Gigi and Venus’s perspectives were when I didn’t know where my child was on her birthday,” Kanye wrote. “Gabby told me she disagreed with that (and that’s me putting it in a nice way). She said it was on her group chats. So why did everyone feel so free to attack me about my t-shirt, but Candace Owens was the only public figure to say that it was wrong for the Kardashians to keep me from seeing my daughter.” (There is no proof that Gabriella had anything to say about the birthday party situation). 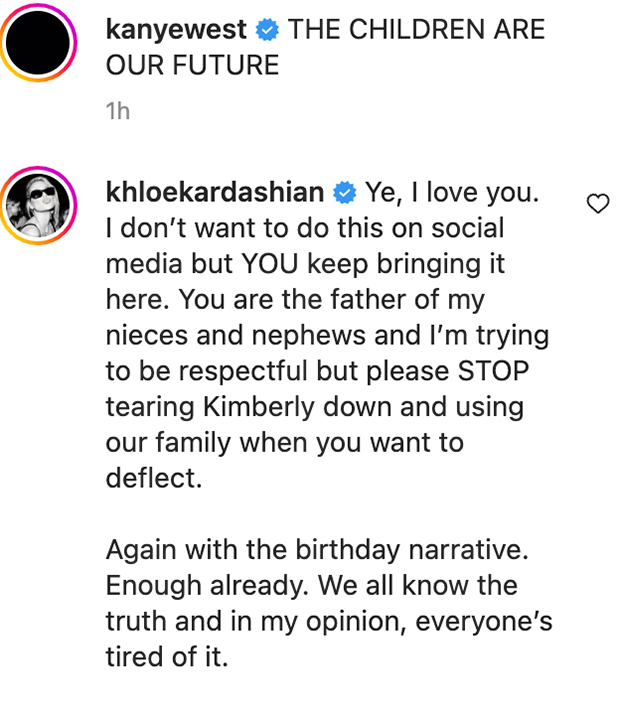 Kanye was referencing his daughter, Chicago West’s, fourth birthday party, which he previously claimed that Kim wouldn’t allow him to attend. Khloe was not happy with the rapper for re-hashing old issues publicly. “Ye, I love you. I don’t want to do this on social media, but YOU keep bringing it here,” Khloe commented on ‘Ye’s post. “You are the father of my nieces and nephews and I’m trying to be respectful but please STOP tearing Kimberly down and using our family when you want to deflect. Again with the birthday narrative. Enough already. We all know the truth and in my opinion, everyone’s tired of it.”

After Khloe commented on his post, Kanye responded with another message of his own. He called Khloe and her family “liars” and said that they “basically kidnapped Chicago” during the birthday party in question. He then made new claims about the family in reference to Psalm West’s birthday party in May 2022. “Y’all play with Black fathers,” Kanye accused. “Y’all also threw a party before Psalm’s birthday when I was flying back from Japan to be there for his birthday and the first I heard about it was seeing pics of the party online.”

After Kanye publicly accused Kim of keeping him from Chicago’s birthday party in Jan. 2022, he eventually showed up at the festivities when Travis Scott gave him the address of the party. Khloe addressed the Kardashians side of the situation in her response to Kanye’s latest Instagram. “You know exactly where your children are at all times and YOU wanted separate birthdays,” she insisted. “I have seen all the texts to prove it. And when you changed your mind and wanted to attend, you came.”

Khloe also referenced one of Kanye’s recent interviews, where he admitted that Kim raises their four children “80 percent” of the time. “Like you have pointed out yourself, she is the one taking care of your kids 80% of the time,” Khloe continued. “Please leave her and the family out of it so that the kids can be raised peacefully. I come from a place of love and am happy to continue this conversation privately if you wish.”

Kim and Kanye have been through plenty of ups and downs since she filed for divorce in Feb. 2021. ‘Ye has publicly called Kim and the Kardashians out on a number of occasions, but Kim has continued to make an effort to co-parent with her ex. Despite his recent tirade against Kim on Instagram, Kanye actually recently publicly apologized to the reality star for his behavior in an interview with GMA. “This is the mother of my children and I apologize for any stress that I have caused, even in my frustration, because God calls me to be stronger,” h said. “I need [Kim] to be less stressed and of the best, sound mind and as calm as possible to be able to raise those children at the end of the day.”