Blake Shelton is revealing why his former ‘The Voice’ co-host Adam Levine wasn’t invited to his July 3 wedding to Gwen Stefani.

Blake Shelton just revealed why his former co-host on The Voice, Adam Levine wasn’t invited to his wedding to Gwen Stefani! “That’s the reason we didn’t invite him to the wedding is that interview he did on your show,” The 45-year-old revealed on The Ellen DeGeneres Show on Dec. 3, speaking of an April appearance Adam had on the show. “It’s like, ‘I’m not inviting him.’”

The country singer was jokingly speaking of an interview Adam had with Ellen DeGeneres in which he facetiously told the talk show host that he “didn’t support” the marriage between Blake and Gwen because “she’s so cool and he’s not.” After Ellen asked if Adam would have been at Blake and Gwen’s wedding were he not to have dissed his former co-host, Blake cleverly responded, “We’ll never know!”

Blake went on to clarify that yes, of course he and the Maroon 5 singer actually do like each other, but he and his blushing bride simply decided to have a small, intimate ceremony with super close friends and family involved. The “God’s Country” singer admitted he didn’t have much to do with the planning of his nuptials and allowed Gwen to take over all the details.

“I was like ‘What do I know about any of that stuff?’” he explained to Ellen. “It was all her idea, her vision. All I had to do was drink and kiss Gwen Stefani. My God, that’s the greatest gig I ever had.” 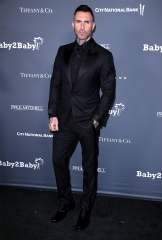 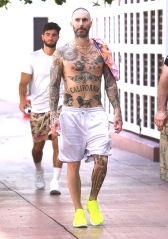 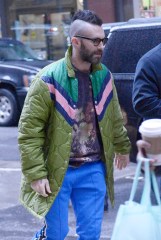 The couple were married on July 3 of this year in a wedding officiated by close friend Carson Daly. Photos of the event showed white tents and tables set up outdoors on Blake’s 1,500 acre Oklahoma ranch. The ceremony took place at the chapel Shelton built on-site, which is also the spot where Blake proposed. Notably, the nuptials came just days after the couple filed for a marriage license in Oklahoma on June 29. Per state law, couples must marry within 10 days of filing (Gwen and Blake wed within 5).