So romantic! Kourtney Kardashian took it old school with a handwritten love note on the a mirror, which BF Travis Barker re-shared to his story.

It’s all in the details with Kourtney Kardashian! The 42-year-old Poosh founder is head over heels in love with boyfriend Travis Barker, 45, and isn’t afraid to show it. In a recent Instagram post, Kourt posted a pic of a super sweet message for the Blink-182 drummer on a foggy mirror that read, “I [heart] you.” Back in May, the reality star also tattooed “I love you” on Travis’ arm, adding to his extensive collection.

In her Aug. 12 mirror post, she added their interlocking initials for an extra personal touch, reminiscent of teens etching their names into tree trunks. Travis, who was tagged, was clearly loving the sexy message — re-sharing the photo to his own story. These two aren’t afraid to show their feelings for each other on social media, and fans couldn’t be happier for Kourt’s next chapter.

Travis and Kourtney have been seemingly inseparable in recent months, often taking to Instagram to share their activities. Just last week, Kourt shared a flirty photo of her buttoned down pajama top as Travis simultaneously snapped a selfie. “Ten days of quarantine …” she captioned the series, which also revealed she got her hair cut by her rocker beau. Her adorable kids Penelope, 9, and Reign, 6, whom she shares with ex Scott Disick, also made appearances in the photos. “10 days with you,” Travis wrote back. 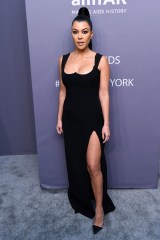 Since romantically linking after a years long friendship this Spring, Kourtney and Travis haven’t been shy about showing sexy PDA! Kourt seemingly shocked her followers when she made out with Travis, who was formerly married to ex Shanna Moakler, in a thong bikini last May. The pair were on a romantic getaway to Utah, where they shared several posts from a boat ride.

Although things seem serious with the pair, fans shouldn’t expect Kourt and Travis to tie the knot anytime soon. “There are no plans for an engagement anytime soon,” a source spills to HollywoodLife EXCLUSIVELY following their  getaway to UFC 264 in Las Vegas where her hairstylist hinted that the pair may have headed to the altar. “Kourtney still has no interest in getting married or engaged to anyone. Marriage is just not her thing…She doesn’t like that kind of a commitment to anyone. She’s happy, more in love than ever and Travis is fine with not being married to her. Friends don’t see her changing her mind but that’s just who she is,” they also said.