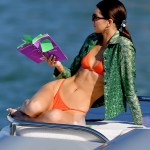 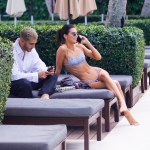 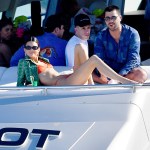 Kendall Jenner was ready to celebrate Cinco de Mayo! The model accessorized with a gold beaded chain and hat as she snapped the selfies.

Kendall Jenner, 25, absolutely sizzled in a yellow bikini! The 818 tequila founder sported the blue flower patterned swimsuit by Bamba Swim as she snapped two selfies posted to her Instagram story on Wednesday, May 5. Kendall added a cowboy hat from Gladys Tamez Millinery to her ensemble, accessorizing with a small gold body chain with black beads from Posh & Pearls. She appeared to be getting ready for a Cinco de Mayo celebration, which she later shared snaps of (plenty of tequila included) to her Instagram story.

The brunette has actively been promoting her 818 tequila brand, which is set to drop this month in California with a blanco, reposado, and anêjo. As part of her launch, Kendall has appeared in several YouTube videos sipping 818 — including an epic “drunk and get ready” with her sister Kylie Jenner, 23. “I chose the reposado,” Kylie said at the beginning of the video — that also included Kendall (rather drunkenly) sharing a story about a high school boyfriend.

Before the story, however, Kylie had one order: that the girls take “one more shot” before getting. the dhow on the road (bringing them to a total of five each). “When I would do my makeup for school, I had really bad acne in middle school,” said, several shots in.. “I remember the summer before ninth grade is when all my acne went crazy and I was like, ‘Sh*t, I’m going into high school and this one guy’s really hot,” she went on, adding a laugh-out-loud wink and a wink. Although Kendall thought she was going to “ruin her chances,” it turns out she ended up “dating” the guy in question.

“It was the confidence that came from within that probably turned him onto me. The point of the story is I would have so much acne and I would try and do my makeup, I knew nothing about makeup at the time,” Kendall confidently said to her younger sister, who is the makeup mogul behind Kylie Cosmetics and Kylie Skin. “I didn’t know how to do my makeup, I’m in ninth grade and I remember every morning we would show up to school, Dad would drop us off, and we’d be walking up the stairs and I’d look at you and be like, ‘Can you see my acne?’ Clearly you could see my acne,” she added.

In recent months, Kendall has also been spotted taking bottles of the tequila to dinners at Craigs with her friend Hailey Baldwin — who she also enjoyed some 818 with on YouTube. The two met up in Hailey’s bathroom of all places to make mac and cheese. While sipping on Kendall’s tequila, the BFFs played a hysterical game of “Never Have I Ever” where they revealed they’ve both gone through exes phones. “In my opinion, you’re always going to find something that you don’t like,” she confessed. “I don’t like doing it, and I’ve only done it a handful of times in high school,” Kendall explained.