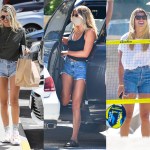 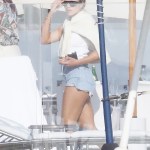 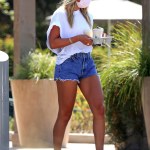 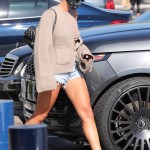 Sofia Richie was a gorgeous sight to see when she stepped out in a flattering outfit that included a pair of Daisy Dukes while laughing and mingling with a group of friends on a balcony in Malibu.

Sofia Richie, 22, had an eventful Sunday on Oct. 11 when she was spotted having an outdoor dinner on a beachfront balcony in Malibu, CA with friends while showing off her incredible figure in a pair of Daisy Dukes. The blonde beauty also wore a white T-shirt and a white sweater tied around her neck for the outing along with sunglasses to help keep the bright rays at bay. As she sat at a table with her pals, including a mystery man, she was all smiles while engaging in conversation.

Sofia’s latest outing is just one of many in which she’s showed off an outfit that included Daisy Dukes. On Sept. 5, she was seen picking up some coffee at Blue Bottle Coffee in Malibu while wearing the denim look along with a loose white top and sandals. Days before that, on Sept. 1, she wore a similar look that included a tan crop top under a matching sweater and a light denim cutoff shorts choice while visiting Malibu Country Mart.

When she’s not wowing with her denim shorts during casual outings, Sofia is getting her fans’ attention by posting incredible selfies on social media. On Oct. 6, she shared a snapshot of herself posing in a long-sleeved light green shirt that was unbuttoned and tied at the end along with what appeared to be a matching fuzzy skirt. She had her long wavy locks down and parted in the middle and cleverly captioned it with, “daily greens.”

Since Sofia is a model, we’re used to seeing her in eye-catching designer clothes but she’s proven time and time again, that she can also rock a casual look unlike any other! The newly single star split from her boyfriend of almost three years, Scott Disick, 37, in Aug., and has seemed to be enjoying her days while looking great on a regular basis ever since. Whether she’s turning heads during an unplanned sighting or purposely sharing moments of her life with her followers, there’s never a shortage of pics with this dazzling lady!

Check out more pics of Sofia rocking pairs of Daisy Dukes in the gallery above. You won’t be disappointed!