Cardi B logged onto Twitter early Thursday morning only to see herself trending with the hashtags, “Cardi B Is Cancelled Party” and “Cardi B Is Over Party” Why? — Internet users believe she has a secret Instagram account (also known as a “finsta”) used to bash other female artists including, Ariana Grande, Lil Kim, Meg Thee Stallion and Doja Cat. It’s unclear how or why Cardi was blamed for the account, which she has since denied belongs to her. The mother of one shared a lengthy response on Instagram, captioned, “My cancel party story.”

So people made this ridiculous lie of me on twitter.Im glad I pulled up all the receipts and DEBUNKED ALL OF IT .Its crazy the time and energy people put to try to destroy you but this was JUST RIDICULOUS 😂😂😩😩It proves to me tho that I intimidate anybody that has any hate towards me that they will find any possible way to break me .YOU CANT BREAK ME ! Bring up my past and everything I said YOU CANT BREAK ME .I WILL BE HERE ! I will not run away from social media ,I will not be discouraged of my work .

“Hey guys lemme tell y’all about the life of a celebrity, the type of dumb sh-t I gotta go through, right. I woke up at 2am… Then, I’m seeing ‘Cardi B is canceled party’ on Twitter and I’m like, ‘What the f–k did I do now?’ I feel like I’ve been minding my own business and eating my food. I’m see people started this crazy rumor that I have a fake Instagram… talking about Ariana Grande, Doja Cat, Megan [Thee Stallion],” she began. “And supposedly Lil Kim commented under the page, Tokyo my hairstylist, my sister [Hennessy] commented under it. When I go to the page, I see that it’s private. I look at the page, and no one follows it.”

Cardi set the record straight, explaining, “Let me make this clear, I’m not a 15-year-old girl that does fake Instagrams that talk about celebrities. I have a whole life, a whole kid. Just to f–kin feed my kid, it takes me about 35 minutes, an hour to bathe her and do her hair, then I gotta do my own f–kin thing. I don’t got time to do that sh-t,” she went on. “I love Lil Kim, I respect her and admire her, but I don’t personally know her,” Cardi said, before she went down the list of female artists who were mentioned in the “finsta” account. 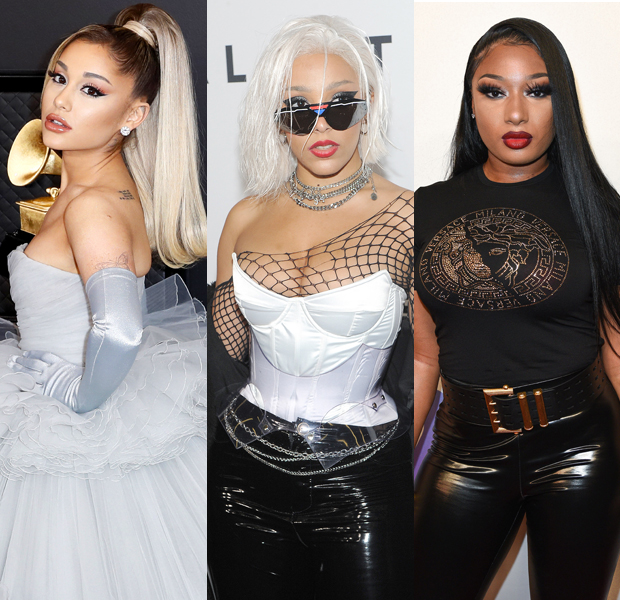 “Ariana Grande? I don’t have a problem with her. I don’t really know her like that. Why would I talk even about her? Megan and Doja Cat, I spoke to Doja. My team is really cool with Megan’s team and my sister is cool with Megan’s stylist. My hair stylist that they claim was on that page is [also] Doja’s hairstylist and they get along pretty well. I don’t have a problem with anybody,” she said.

Cardi went on to unveil the alleged culprit behind the page admittedly doing some sleuthing online. “All along it was a white male behind that page,” Cardi claimed. “So it was like why, y’all did this ‘Cardi B is over party’ all over a lie? Can you believe the type of shit we [celebrities] gotta go through… Issues, lies and rumors spread about you for no f–kin reason,” she said, noting that the situation was “some bull-shit scandalous crap.”

The “Be Careful” rapper continued, “I don’t understand… I don’t talk about nobody. Then it’s like damn, what do you want me to do, delete my life existence? You want me to die? Y’all trying to cancel me. What? You want me to delete my Instagram and run? No, it’s not happening,” said said, concluding with a call to action: “Just stop, stop it. Thank you.”

Cardi also provided a long passage in the caption of her video post, warning her enemies that she can’t and won’t be broken. “So people made this ridiculous lie of me on Twitter,” she began. “I’m glad I pulled up all the receipts and DEBUNKED ALL OF IT. It’s crazy the time and energy people put to try to destroy you, but this was JUST RIDICULOUS. It proves to me tho, that I intimidate anybody that has any hate towers me —that they will find any possible way to break me,” she explained, assuring haters, “YOU CANT BREAK ME! Bring up my past and everything I said, YOU CANT BREAK ME. I WILL BE HERE! I will not run away from social media, I will not be discouraged of my work,” she vowed.

As for the other artists who were dragged into the “finsta” drama, they have not yet addressed the situation. Despite her past beef with rapper Nicki Minaj, Cardi has never had any negative public encounters with Ariana Grande, Doja Cat, Meg Thee Stallion or Lil Kim.