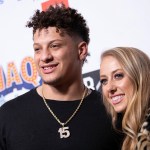 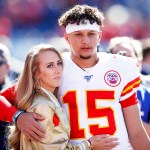 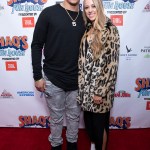 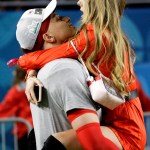 For the second year in a row, Brittany Matthews will get to celebrate her man, Patrick Mahomes, as he plays in the Super Bowl with the Kansas City Chiefs.

Brittany Matthews is the fiancee of Kansas City Chiefs quarterback, Patrick Mahomes. Fans got to know Brittany after Patrick helped lead the Chiefs to a Super Bowl win in 2020, and she excitedly cheered him on. Now, the team is back in the big game for the second year in a row! This time around, Patrick and Brittany have even more to celebrate, as they’re also expecting their first child. Here’s more to know about Brittany:

Brittany and Patrick have the ultimate romantic love story — they’re high school sweethearts! Brittany and Patrick met when they were teenagers and were both attending Whitehouse High School in Texas. He graduated high school in 2013, while she was one year younger and graduated in 2014. The two continued their relationship after graduation, despite not going to college together (Patrick attended Texas Tech University and Brittany went to University of Texas at Tyler, where she graduated with a Bachelor’s degree in Kinesiology).

Patrick was signed to the Kansas City Chiefs in 2017, and he and Brittany bought their first home in Kansas City in 2019. In 2020, he signed a 10-year, $500 million contract with the Chiefs, so they’ll likely stay in the area for quite some time. Patrick proposed to Brittany in Sept. 2020, on the same day that he received his first Super Bowl ring. The proposal took place at the Chiefs’ Arrowhead Stadium. Patrick surprised Brittany with a gorgeous arrangement of flowers, with some spelling out, “Will You Marry Me?” Of course, she said yes!

Brittany played soccer in college at the University of Texas at Tyler. She also went on to play professionally for one year in Iceland. As a former soccer star, Brittany is extremely motivated when it comes to fitness. After a year of playing professionally, she realized that she enjoyed being in the gym more than being on the field. Now, she owns her own company called Brittany Lynne Fitness. She offers online programs to clients who want to “tone, grow muscle and get STRONG,” according to her website.

When Is Brittany Matthews’ Due Date?

Brittany and Patrick confirmed that they were expecting their first child at the end of Sept. 2020, just weeks after they got engaged. It was later revealed that they would be having a baby girl. Brittany has not shared her exact due date, but it’s expected that her little one will arrive in March or early April 2021.

Although Brittany doesn’t play soccer herself anymore, she is the owner of the Kansas City NWSL, a professional women’s soccer team. She co-owns the team with founders Angie and Chris Long. The team was founded in Dec. 2020.