While the world seems more divided than ever, there’s (usually) one thing that we all can agree on: dogs are way sweet. And what better day to celebrate them, since March 23rd is officially National Puppy Day! Celebrities don’t wait until a nationally designated day to celebrate their pooches, though. Tons of stars have been spotted taking their pups for walks or showing off their love for man’s best friend on their social media. 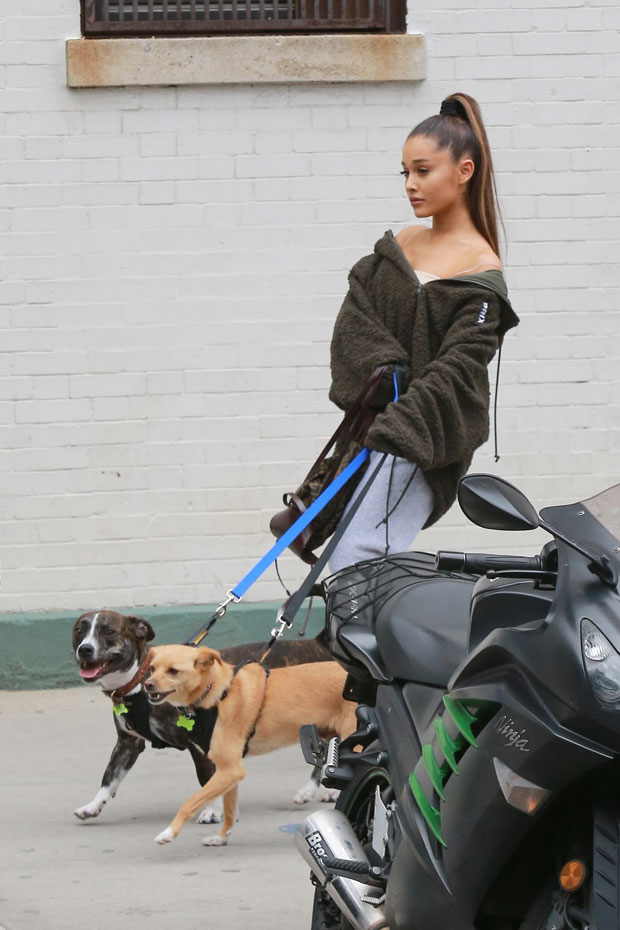 Ariana Grande with her rescue dogs, Myron (whom she adopted with her late ex, Mac Miller) and Toulouse. [BACKGRID]

Whether it’s Emily Ratajowski and her dog Columbo or the numerous puppers Kylie Jenner has owned, major stars have major love for our canine friends. Scroll through the gallery to check out some celebs – like Megan Thee Stallion, Camilla Cabello, and Paris Hilton – spending some quality time with dogs.

With tons of time spent at home over the past two years, tons of stars have had plenty of time to bond with their furry friends. Some have even found ways to feature their pets in their social media, like Mariah Carey who sang her hit “All I Want For Christmas Is You” to her puppies along with her twins on December 22, 2021. Even though celebrities have undoubtedly loved spending time with their pets, there have been a few instances where their pups can get in the way. Just Jennifer Aniston, whose dogs sweetly interrupted her home workout on February 9. She didn’t seem to mind much though!

Lady Gaga is another dog mom who absolutely adores her three French bulldogs Gustav, Koji, and Asia. Gaga sadly went through a pet owner’s worst nightmare on Feb. 24, 2021. On that day, her dog walker, Ryan Fischer, was walking the pop star’s three dogs when thieves pulled up beside him, got out of their car, and demanded that he hand over the dogs. The thieves allegedly shot Ryan in the chest and made off with Gustav and Koji, while Asia managed to escape.

Gaga took to Instagram to beg for the return of her dogs with the addition of a $500,000 reward. Fortunately, an unnamed woman returned the dogs “unharmed” to an LAPD station two days later, which HollywoodLife confirmed with an LAPD spokesperson. Gaga’s dog walker, Ryan, is also expected to make a full recovery from his injuries.

Who can blame Gaga’s reaction? After all, anyone would feel the same way if their dogs were stolen. Certainly, Emily Ratajowski would. Before announcing that she and husband Sebastian Bear-McClard were expecting their first child together, Emily was constantly spotted taking Columbo for walks around New York City.

Speaking of women who strut down catwalks, who could forget when Gigi Hadid walked the catwalk while holding a dog? The model famously carried a puppy down the runway at the Tods show during Milan Fashion Week. Her little friend basically stole the show at the February 23, 2018 event. Meanwhile, her pal Cara Delevingne cuddled with one little pup during the Superpower Dog premiere in March 2019. A-listers love bringing pooches to red carpets, and Chris Pratt, 40, had so much fun with one labrador pup on the Onward red carpet. Of course, Camila Cabello famously brought a sweet pup as her date to iHeartRadio’s Jingle Ball.

Even celebs have to get out and about to walk their dogs. David Beckham doesn’t seem to mind though! The soccer star soaked in some sun, while he walked his dogs shirtless in July 2021. In 2020 Ben Affleck and his kids were regularly spotted with their dad’s then-girlfriend Ana De Armas, while walking their dogs on the West Coast! Amanda Seyfried is also spotted out for walks. She even took her beloved Finn with her to a taping of The Late Show with Stephen Colbert in August 2019. To see more stars with their dogs, scroll through the gallery above!