UPDATE (4/29/21, 4:57 PM ET): Law enforcement arrested five suspects — James Jackson, 18, Jaylin White, 19, Lafayette Whaley, 27, Harold White, 40, and Jennifer McBride, 50 — in connection to the February failed dog-napping of Lady Gaga’s two French bulldogs and shooting of her dog walker, Ryan Fisher. One of the suspects — McBride — was allegedly the woman who reported that she “found” the dogs and brought them to a Los Angeles Police Department station, police claimed in the LAPD press release obtained by HollywoodLife.

“Detectives do not believe the suspects were targeting the victim because of the dogs owner. However, evidence suggests the suspects knew the great value of the breed of dogs and was the motivation for the robbery,” the press release further reported.

ORIGINAL: Lady Gaga has to be breathing a major sigh of relief and crying tears of joy, as her French bulldogs Koji and Gustav have been recovered after being stolen at gunpoint in Hollywood on Feb. 24. A woman turned the pups into an LAPD station on the night of Feb. 26, HollywoodLife.com confirmed with the Los Angeles Police Department spokesperson, who said the dogs were  “unharmed. It’s unclear whether the woman will receive the $500,000 reward Gaga put up just hours earlier in the day in a desperate plea for the safe return of her pets.

Gaga, 34, had been absolutely beside herself with heartache ever since Feb. 24. That night her friend and dog sitter Ryan Fischer took her three Frenchies out for a walk in Hollywood when two men drove up in a white Nissan Altima and ambushed him on the sidewalk. They tried to steal the dogs, while Ryan valiantly tried to protect them. One of the suspects pulled out a gun and shot Ryan in the chest, as the two men grabbed Koji and Gustav and sped off. Sadly, the suspects remain at large, though the police have a description of the two men.

Ryan was rushed to the hospital in critical condition, but is expected to recover. He managed to save one of the pups — Miss Asia — from the dognappers. When first responders arrived on scene, he was collapsed on the ground but holding Miss Asia tightly in his arms to protect her. She was later reunited with one of Gaga’s bodyguard, who picked up the pup at LAPD’s Hollywood station after Ryan was hospitalized. 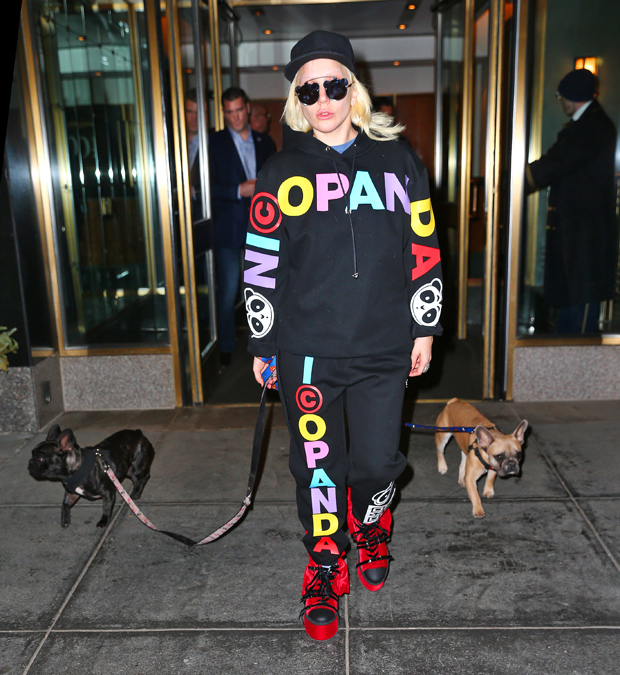 Lady Gaga leaves her NYC apartment to take her French bulldogs Miss Asia and Koji for a walk on Feb. 18, 2016. Photo credit: SplashNews

Related: Lady Gaga’s Tattoos: Everything To Know About The Superstar’s Body Art

Gaga has been having to watch the heartbreaking situation unfold from afar, as she is in Rome, Italy shooting a movie. In an Instagram post earlier in the day on Feb. 26, she shared a series of photos of Koji and Gustav. “My beloved dogs Koji and Gustav were taken in Hollywood two nights ago. My heart is sick and I am praying my family will be whole again with an act of kindness,” she began in the caption.

“I will pay $500,000 for their safe return. Email KojiandGustav@gmail.com to contact us. Or, if you bought or found them unknowingly, the reward is the same,” she wrote in the caption. It’s unclear if the woman who turned the dogs in to the police had unknowingly purchased the stolen pets, or if she has any connection to the suspects. Gaga added, “I continue to love you Ryan Fischer, you risked your life to fight for our family. You’re forever a hero.”