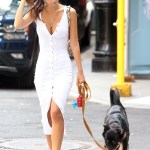 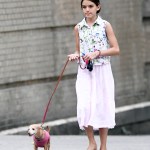 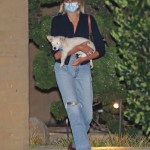 Doggnapped! Two of Lady Gaga’s precious pups have reportedly been stolen after an armed robbery, and a distraught Mother Monster is offering a half-a-million-dollar reward for the return of her babies!

UPDATE, 20:06 PM ET: Lady Gaga‘s father, Joe Germanotta, revealed the family’s distress over the kidnapping of the pop star’s dogs. “We’re just sick over it, it’s really horrible. It’s like someone took one of your kids,” Joe told The New York Post on Feb. 25. He also revealed that he has spoken to his famous daughter “several times” since the incident and told her, “Just try to be strong and remember that they’re [Gaga’s dogs] together.”

UPDATE, 10:45 AM ET: Though TMZ reports that the dog walker is expected to “recover,” the LAPD says that the victim is in “critical” condition.

ORIGINAL: “We have no connection of it being Lady Gaga. We don’t have any confirmation of that,” Officer Jeff Lee, PIO for LAPD tells HollywoodLife. “Last night around 9:40 pm LA time LAPD officers from Hollywood division responded to an assault with a deadly weapon radio call involving a shooting. When they arrived they discovered that a male white in his 30s was suffering from at least one gunshot wound. At least one suspect fled the location in a white vehicle and he used a semi-automatic handgun during the course of the crime and took two French bulldogs. The suspect and weapon are still outstanding. No arrests have been made and the investigation continues. The victim is in critical condition at a local hospital.”

Original: A terrible crime reportedly happened to the Lady Gaga family on Wednesday night (Feb. 24). A dog walker tasked with taking Gaga’s French Bulldogs for a stroll was reportedly shot and robbed, according to TMZ. The publication claims that the dog walker was shot, and “the gunman made off with two of the dogs, named Koji and Gustav.” According to the publication, the dog walker was taken to the hospital shortly afterward, and he’s “expected to fully recover.” HollywoodLife has reached out to both the LAPD and Lady Gaga for a comment and will update this post when we hear back.

There were reports that only two bulldogs were involved in the incident, but TMZ claims all three dogs were being walked, and two were taken. The third French Bulldog – named Asia — reportedly ran away during the incident, but was later recovered. Gaga is currently working on a new movie in Rome, and the TMZ reports that she’s “extremely upset” and offering $500,000 for anyone who has her two bulldogs – “no questions asked.” TMZ reports that “anyone who has the dogs can use this email — KojiandGustav@gmail.com — to retrieve the reward.”

TMZ also reports that it’s unsure if the alleged gunman knew that the dogs specifically belonged to Lady Gaga, and that “French Bulldogs are in demand and expensive.” TMZ says its sources say it’s possible that the gunman had no idea the dogs were Lady Gaga’s, and they were trying to snatch some in-demand doggos.

Lady Gaga’s love of her bulldogs is well known. Asia was dubbed “the most famous dog on the internet” by Karl Lagerfeld, according to Harper’s Bazaar, after the dog appeared on the cover of the publication’s September issue. “Asia is my inspiration for many things,” she said to the late fashion designer in a one-on-one interview for the mag. “She has really shown me the importance of living in the moment. If I don’t, I’ll miss a precious look on her face! She is a very romantic and loving animal, and this sort of poetry is what art is all about, I think. Interaction. She loves to sit with me when I record jazz. She never barks or makes noise; she just looks at me with her big ears.”

Gaga also opened up about her “little friend” while speaking to Extra in 2014. “I do all sorts of normal things, I mean probably the same as everyone, I go see my family, go to my dad’s restaurant in New York, I have a new puppy, I play with her,” she said. “I always feed her, I sleep with her every night, I take her out to go potty and it’s really sweet because she is like my little friend.”