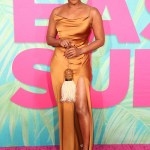 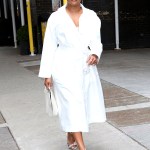 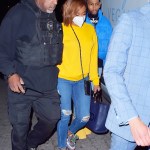 Bio:
Tiffany Haddish (born on December 3, 1979 in Los Angeles, CA) is an American actress and comedian. She gained fame on OWN television network’s show “If Loving You Is Wrong,” in which she played Jackie from 2014 to 2015. Then, from 2015 to 2017, Tiffany starred as Nekeisha Williams on the NBC sitcom The Carmichael Show, before her breakthrough role as Dina in the critically-acclaimed comedy Girls Trip. Shortly after, in August 2017, Tiffany’s stand-up show, Tiffany Haddish: She Ready! From the Hood to Hollywood premiered on Showtime, and she also became the first black female comedian to host Saturday Night Live. In December 2017, Tiffany released her memoir, The Last Black Unicorn, which debuted at number 15 on the New York Times best-seller list. She is currently set to lead in the comedy Limited Partners and star alongside Kevin Hart in the comedy film Night School. Tiffany will be hosting the MTV Movie & TV Awards on May 6, 2018!

Best Known For:
Tiffany Haddish is best known for her role in Girls Trip.

Personal Life:
Tiffany got into comedy at age 17 after she was given an ultimatum to either go to psychiatric treatment to help her recover from childhood trauma or go to the Laugh Factory Comedy Camp. She was mentored by the Wayans brothers, Richard Pryor, and Dane Cook and says comedy “literally saved my life.” Before her success on camera, Tiffany was homeless and lived in her car through her 20s. She married and divorced William Stewart twice — filing for divorce once in 2011 and again in 2013. In her memoir, Tiffany claimed she suffered a miscarriage after William physically abused her.

If Tiffany Haddish didn’t win the #SilhouetteChallenge, she certainly won at life. The ‘Girls Trip’ star rocked some sexy lingerie in her take on the viral trend before getting hot and heavy with her man, Common.

Tiffany Haddish was so proud to say ‘she ready’ after her intense 30-day weight loss transformation! Check out the comedian’s final results with before and after photos she shared on Instagram!

Tiffany Haddish has a message for everyone: she’s back, and she’s ‘ready.’ The ‘Girls Trip’ star revealed she got that mantra shaved into the back of her buzzcut, so check out the ‘before and after’ of her new ‘do.

Tiffany Haddish is one of the rare celebs to come out of quarantine with a major weight loss, as well as super ripped abs! The comedian is telling fans how she dropped 40 pounds during lockdown.

Tiffany Haddish was the latest guest star on the ‘Lady Parts’ series, hosted by Sarah Hyland! No subject was too sensitive between the actresses, who even discussed an incident that ‘knocked’ one of their uteruses ‘out of place’!

After months of keeping fans guessing about her relationship status with Common, Tiffany Haddish finally confirmed that she’s dating the rapper — and it’s serious!

Tiffany Haddish stunned in her gorgeous new selfie, revealing that she’s ‘loving’ her new, bald look! See before & after photos of the ‘Girls Trip’ star.